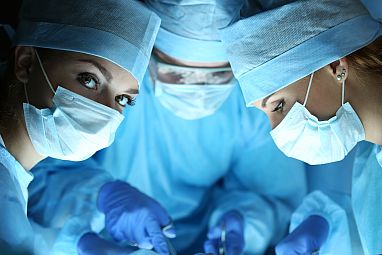 Melanoma is the most serious type of skin cancer. It’s more likely than others to invade nearby tissues and spread. It can spread to lymph nodes, which are part of the immune system, and then to other parts of the body through lymph vessels. If cancer is found in any lymph nodes, therapy choices may be more aggressive.

When melanoma is diagnosed, doctors perform a sentinel lymph node biopsy. The patient receives an injection of a tracking compound near the tumor. The substance flows through lymph vessels to the nearest lymph node or nodes. These are the nodes most likely to have cancer. The surgeon removes only the nodes with the tracking substance. 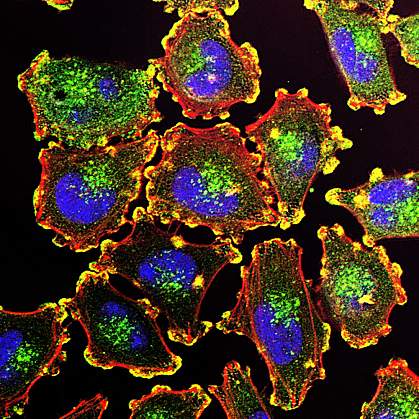 The ability of cancer cells to move and spread depends on structures such as podosomes (yellow), shown here in melanoma cells. Julio C. Valencia/NCI Center for Cancer Research

Researchers launched a study to find out whether immediately removing the cluster of nearby nodes enabled patients with a cancer-containing sentinel node to live longer than those having only the sentinel node removed. The international study, conducted at 63 centers, was led by Dr. Mark Faries at the John Wayne Cancer Institute in Santa Monica, California. Faries is now with the Angeles Clinic and Research Institute, an affiliate of Cedars-Sinai. The study was supported in part by NIH’s National Cancer Institute (NCI). Results appeared in the New England Journal of Medicine on June 8, 2017.

The researchers recruited more than 1,900 patients after their sentinel lymph nodes were removed and showed cancer. The patients did not have clinical evidence of other lymph node involvement. They were randomly divided into two groups. The immediate surgery group had the cluster of remaining nodes in the area immediately removed. For the observation group, the cluster of remaining nearby lymph nodes was removed only if clinical signs of cancer appeared there later on during a follow-up exam.

The analysis showed that the immediate surgery group did not live longer than the observation group. The findings suggest that there is no significant life-extending benefit to removing the entire cluster of lymph nodes at the time of sentinel lymph node biopsy.

“The new findings likely will result in many fewer of these procedures being performed around the world,” Faries says. “The results also will likely affect the design of many current and future clinical trials of medical therapies in melanoma.”