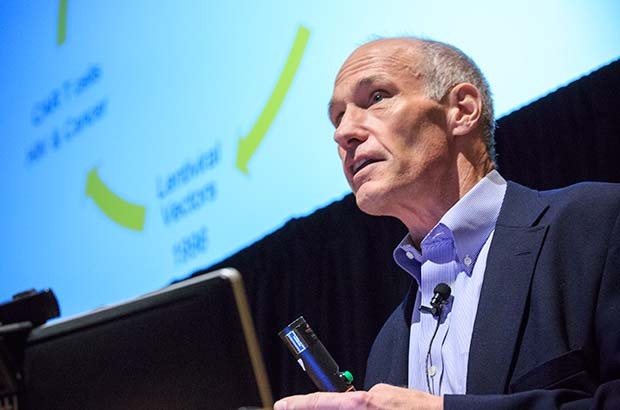 University of Pennsylvania immunotherapy researcher Dr. Carl June, who led the development of an experimental therapy for advanced childhood leukemia that is expected to become the first CAR T-cell therapy to win U.S. Food and Drug Administration approval, will give the keynote talk today at the Conference on Cell & Gene Therapy for HIV Cure at Fred Hutchinson Cancer Research Center.

For June, the occasion — delivering a Fred Hutch talk on HIV research — is a double homecoming. He was a Fred Hutch oncology fellow studying bone marrow transplantation from 1983 to 1986. Then he spent the next 10 years as an HIV researcher in a Navy-funded laboratory before returning to studying cancer.

Today director of the Center for Cellular Immunotherapies at the Perelman School of Medicine and a co-director of the Parker Institute for Cancer Immunotherapy, June is among a handful of scientists around the world, including here at Fred Hutch, working to develop CAR-T therapies for cancer. These still-experimental therapies genetically reprogram a patients’ own T cells — a type of immune cell that searches out and destroys abnormal or infected cells — with synthetic receptors called chimeric antigen receptors, or CARs, to kill cancer.

In a phone interview last week from Philadelphia, June called his years at the Hutch “a transformative time” in his career.

“I started research there that has continued into today — a fascination with T cells and their biology,” he said.

June credits his success not only to that early fascination with T cells but to the cross-pollination afforded by a career that’s spanned both HIV and cancer. He applied what he learned from early studies of T-cell therapies in HIV to cancer and still spends on average one day a week on HIV research.

It is that synergy — between cancer researchers and infectious disease researchers — that excites him about the new role he has taken on as a member of the scientific advisory board for defeatHIV, which is hosting this week’s conference. Led by stem cell transplant and gene therapy specialist Dr. Hans-Peter Kiem and virologist Dr. Keith Jerome, defeatHIV is a federally funded, Fred Hutch-based, public-private research group focused on developing immunotherapy and cell-and-gene therapy cures for HIV. June attended his first defeatHIV advisory board meeting Wednesday before the conference launched today.

“Carl is unique in many aspects,” said Kiem, who has worked with June on HIV cure research. “He is a pioneer in CAR T-cell work. He took this broad knowledge from bone marrow transplantation and moved it into T-cell therapies for both HIV and cancer. On top of that, with all of the tremendously important and seminal papers he’s published, he’s such a wonderful and humble person.”

June was a young Navy physician when he arrived on the Fred Hutch campus in 1983. He had already fallen in love with research after spending his last year of medical school at a World Health Organization laboratory in Geneva studying malaria. During the Cold War period, the Navy was interested in bone marrow transplantation as a treatment for radiation casualties. So they sent June to learn from the master  — Fred Hutch’s Dr. E. Donnall Thomas, who pioneered the development of bone marrow transplantation.

At the Hutch, June worked under Dr. John Hansen and with Dr. Paul Martin — whom he credits with teaching him that most necessary of skills, how to write a scientific paper. His two mentors provided, he said, “a wonderful environment” to learn about immunology.

Martin and Hansen had identified a certain immune protein that could bind to — and alter— T cells in the lab. This pivotal finding showed that certain molecules could change how T cells behave — an essential step for modern approaches to cellular immunotherapy. June began developing methods for multiplying T cells in the lab using that immune protein. In a previous interview, he described the period in Martin and Hansen’s lab as “being in the right place at the right time.”

Then, of course, there was Thomas, leader and founder of the transplant research group. June recalled what it was like to attend meetings with the pioneering researcher to discuss managing various challenging cases.

“He was intimately involved, but the decisions were made by consensus,” he said. “He led. He was a very good leader. He used the brains of everyone.”

“I can remember a paper that I wrote that [Don] was on,” he said. “Dottie checked every reference. And this was before we had computer searches. She had his back. He and Dottie were an amazing team.”

‘The immune system mattered in cancer’

In the early days of bone marrow transplantation, scientists did not yet fully understand the key role played by the immune system: Donor stem cells were not merely replacing a leukemia or lymphoma patient’s immune system after it had been destroyed by chemotherapy and radiation, they were actually contributing to the cure.

“The bone marrow transplantation that Don [Thomas] and Rainer Storb and others did was initially thought to work because of super-lethal chemotherapy,” June said.

The realization that the transplanted immune system itself played a role in curing cancer came from “an amazing study done at the Hutch,” said June, led by Dr. Paul Weiden with Thomas, Storb and others. It compared the outcomes in leukemia patients whose donors had been identical twins to those whose donors had been regular siblings. Early on, identical twins were considered ideal donors because their immune systems would exactly match that of the patient, thus avoiding graft-vs.-host disease, or GVHD — a serious, often fatal condition in which the newly donated immune system attacks the patient’s body as “foreign.” But in two pivotal studies published in the late 1970s and early 1980s, Weiden and others showed that the patients with non-identical donors who developed GVHD had lower rates of their cancer returning, suggesting a “graft-vs.-leukemia” effect.

“That led to the conclusion that has held up to today that it was basically an immune response — immunotherapy delivered by the transplant — that cured the patients who had [difficult-to-treat] leukemia,” June said. “It was the first human data that the immune system mattered in cancer.”

Much of the research that followed focused on how to get the best graft-vs.-leukemia effect while limiting GVHD. But also from this sprang the idea of taking T cells from the patients themselves instead of from donors and tweaking them to fight cancer — so-called adoptive T cell therapies.

“Studies of the immunology of adoptive T-cell therapy started in cancer mouse models,” said June. “[Drs.] Mac Cheever and Phil Greenberg did those at the Fred Hutch.”

From cancer to HIV and back

After his time at Fred Hutch, June opened his own lab in 1986 at the Naval Medical Research Institute in Bethesda, Maryland. Because the Navy funds research on casualty care and infectious diseases but not cancer, he continued to do basic research on T cells but focused his efforts on HIV.

Tapping his past Hutch research and working with then postdoctoral research fellow, now lab partner Dr. Bruce Levine, he perfected a method for multiplying T cells outside of the body that is widely used today. They infused laboratory-grown T cells back into a small number of patients with late-stage HIV/AIDS whose own T cells had been ravaged by their infections, showing that it could be done safely and that it boosted the patients’ depleted immune function.

He and his lab also collaborated on studies using the HIV virus itself — shorn of its ability to cause disease — as a vector, or tool, to genetically modify T cells so that they would attack HIV-infected cells. He conducted the first human trials using CAR T cells in people with HIV. Again, they showed the approach was safe, feasible and able to improve patients’ immune function.

A personal tragedy brought June back to cancer research with a new urgency: In late 1995, his wife, Cindy, was diagnosed with ovarian cancer.

She died in 2001, the year he enrolled his first leukemia patient in a clinical trial testing an experimental adoptive T-cell therapy, similar to the early trial he had done for people with HIV.

By then, June had retired from the Navy and started his lab at Penn. Although his main focus had become cancer, he continued to draw from his HIV research.

“Being in two camps at one time made a huge, huge impact,” he said. “For me, it was very useful to learn about virology and HIV. If you’re only in one field, you tend to get isolated. But with multidisciplinary interactions, it’s easier to find new steps that haven’t even been thought about rather than incremental steps.”

Timothy Ray Brown (second from left) with Dr. Gero Hütter (third from left), the German hematologist who did the transplant that cured him; and Fred Hutch researchers Drs. Hans-Peter Kiem and Keith Jerome (far right) during a visit to the Hutch campus in 2015. Behind them is a portrait of the Thomases.

A decade of milestones

Even after moving to Penn, June kept a hand in HIV research. Like everyone else in the field, he became newly inspired in 2008, when the world learned that Timothy Ray Brown had become the first and so far only person known to be cured of HIV.

A year earlier, the Seattle-born Brown had needed a bone marrow transplant to treat acute myeloid leukemia. In what proved to be a successful attempt to also cure Brown’s HIV infection, his doctor in Berlin — where Brown was living at the time — found a stem cell donor who carried two copies of a rare gene mutation that confers natural resistance to the virus. (Brown also is attending the conference and is scheduled to join Kiem and Jerome in giving opening remarks today.)

This “proof of concept” that a cure was possible prompted scientists around the world to work on a variety of different — and less toxic — cure approaches. June is working on genetically engineering T cells in HIV-positive patients. This is similar to an approach under study by Kiem and defeatHIV, except they are focusing on stem cells rather than T cells.

But June’s most noteworthy advances to date have come in cancer research. In 2011, his research team published findings that two of three patients with advanced chronic lymphocytic leukemia went into complete remission after receiving CAR T cells. In 2012, the therapy successfully treated a young girl with severe relapsed acute lymphoblastic leukemia, or ALL, with more successes reported as the trial progressed.

That same year, the pharmaceutical company Novartis licensed the rights to therapies created in June’s lab. In July, the Oncologic Drugs Advisory Committee unanimously recommended that the FDA approve Novartis’s application to bring the CAR T-cell therapy for pediatric ALL developed in June’s lab to market. Approval is expected this fall.

“That’s a big milestone,” June said. “Now we’re going to have FDA approval of CAR T-cell therapy in leukemia. And I think the HIV field will be able to draft off of the fact that it’s going to be routinely used in cancer. It will be a big boost to HIV research.”