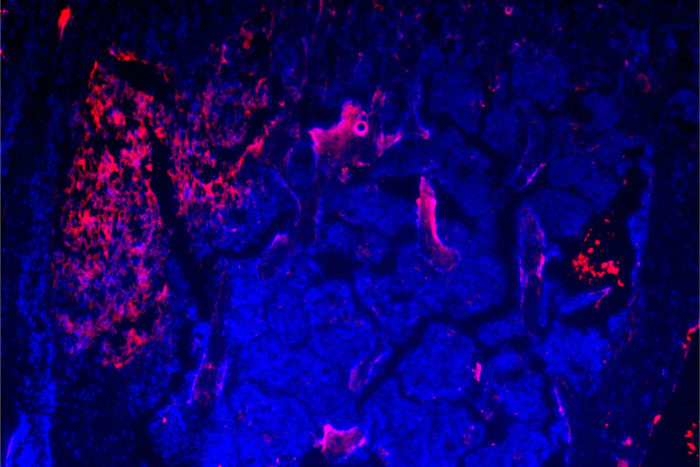 Seeking new treatments for metastatic breast cancer, researchers have designed nanoparticles (shown in magenta) that carry chemotherapy and are targeted directly to tumors that have spread to bone. The strategy, developed in mouse studies at Washington University School of Medicine in St. Louis, lets chemotherapy penetrate the protective environment of bone and minimizes toxic side effects.

Breast cancer that spreads often infiltrates bone, causing fractures and intense pain. In such cases, chemotherapy is ineffective because the environment of the bone protects the tumor, even as the drug has toxic side effects elsewhere in the body.

Now, scientists at Washington University School of Medicine in St. Louis have developed a nanoparticle that can deliver chemotherapy directly to tumor cells that have spread to bone. In mice implanted with human breast cancer and exposed to circulating cancer cells likely to take up residence in bone, the researchers showed the treatment kills tumor cells and reduces bone destruction while sparing healthy cells from side effects.

The study is available online in the journal Cancer Research.

“For women with breast cancer that has spread, 70 percent of those patients develop metastasis to the bone,” said senior author Katherine N. Weilbaecher, MD, a professor of medicine. “Bone metastases destroy the bone, causing fractures and pain. If the tumors reach the spine, it can cause paralysis. There is no cure once breast cancer reaches the bone, so there is a tremendous need to develop new therapies for these patients.”

In the study, the researchers showed that breast cancer cells that spread to bone carry molecules on their surface that are a bit like Velcro, helping tumor cells stick to the bone. These adhesion molecules also sit on the surface of cells responsible for bone remodeling, called osteoclasts.

“In healthy bones, osteoclasts chew away old, worn out bone, and osteoblasts come in and build new bone,” said Weilbaecher, who treats patients at Siteman Cancer Center at Barnes-Jewish Hospital and Washington University School of Medicine. “But in cancer that spreads to bone, tumors take over osteoclasts and essentially dig holes in the bone to make more room for the tumor to grow.”

A collaboration with co-senior author Gregory M. Lanza, MD, PhD, a professor of medicine and of biomedical engineering, then led to the design of a nanoparticle that combines the bone-adhesion molecules with a form of the cancer drug docetaxel, which is used to treat breast cancer as well as other tumors. The adhesive molecules allow the nanoparticle to penetrate the otherwise protective environment of the bone matrix in a way that, in essence, mimics the spreading of the tumor cells themselves. The result is a delivery method that keeps the chemotherapy drug contained in the nanoparticle until the adhesion molecules make contact with the tumor cell, fusing the nanoparticle with the cell surface and releasing the drug directly into the cancer cell.

“When we gave these nanoparticles to mice that had metastases, the treatment dramatically reduced the bone tumors,” Weilbaecher said. “There was less bone destruction, fewer fractures, less tumor. The straight chemo didn’t work very well, even at much higher doses, and it caused problems with liver function and other toxic side effects, which is our experience with patients. But if we can deliver the chemo directly into the tumor cells with these nanoparticles that are using the same adhesive molecules that the cancer cell uses, then we are killing the tumor and sparing healthy cells.”