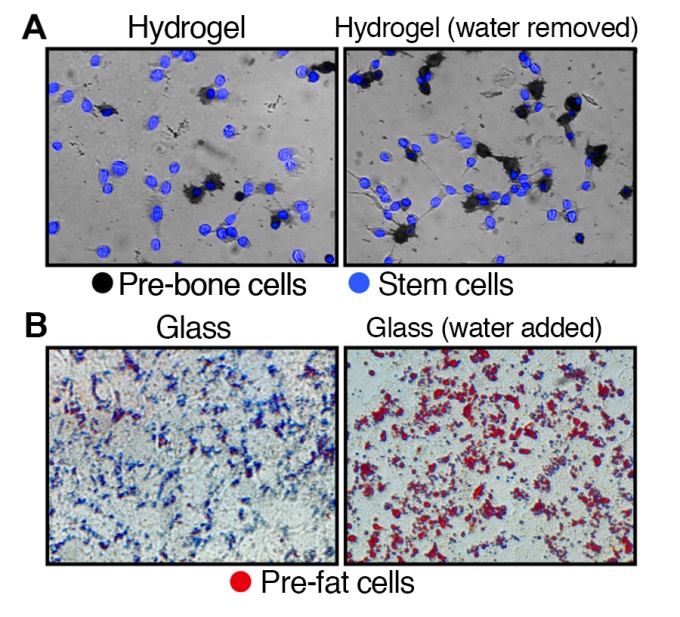 Adding or removing water from a stem cell can change the destiny of the cell, researchers have discovered in a new study published on Monday in the Proceedings of the National Academy of Sciences of the United States of America (PNAS).

The research found that altering the volume of a cell changed its internal dynamics, including the rigidness of the matrix lining the outer surface. In stem cells, removing water condenses the cell, influencing the stem cells to become stiff pre-bone cells, while adding water causes the cells to swell, forming soft pre-fat cells.

Researchers have long understood that stem cells are influenced by the cells around them, picking up cues on what their function should be based on the stiffness of the matrices of neighboring cells.

The results, however, confirm that nature plays as much of a role as nurture in stem cell behavior and development.

“The findings from this study add a fascinating new tool to our understanding and utilization of stem cell biology for regenerative medicine,” says co-author Praveen Arany, assistant professor in the Department of Oral Biology, UB School of Dental Medicine.

The study was led by Ming Guo, d’Arbeloff Assistant Professor in the Department of Mechanical Engineering at the Massachusetts Institute of Technology; and David Weitz, Mallinckrodt Professor of Physics and of Applied Physics in the John A. Paulson School of Engineering and Applied Sciences at Harvard University.

“For the first time, we’re beginning to understand the importance of cell volume and cellular water content in the mechanical properties and physiological functions of cells,” says Guo, who began the research as a graduate student in Weitz’s lab at Harvard.

The line between bone and fat

The research originally sought to understand the effects of volume on a cell’s characteristics and functions. Cell volume is highly regulated and changes frequently over the course of a cell’s life, increasing as the cell grows and decreasing when it divides.

These changes in volume are a result of variations in the amount of protein, DNA and other materials within the cell, though they mostly remain constant. But cells also can experience rapid and extreme changes in size and density through the absorption or release of water, spreading or shrinking in as little as 20 minutes.

By increasing or decreasing the volume of cells by 20 percent, the investigators found the cells experienced several internal changes, including in gene expression and stiffness.

Knowing the role cell stiffness plays in the development of stem cells, the researchers began to wonder if cell volume could affect their fate as well.

To test the premise, investigators placed stem cells at their normal volume in a hardened hydrogel substrate to simulate the rigidness of bone cells. After one week, a large portion of the stem cells developed into pre-bone cells.

A similar experiment was conducted using glass. Researchers placed stem cells on glass to simulate a stiffer environment and found that few of the cells developed into pre-fat cells. It was not until the volume of the stem cells was increased by 20 percent that a spike in the formation of fat cells was found.

The investigators discovered that changing the volume of the cells caused them to behave similarly to as if they were under environmental pressures.

“The surprising thing about these experiments is the observation that volume seems to be related to so much about the cell. It seems to dictate the cell stiffness, as well as the cell fate,” says Weitz, also a core faculty member of the Wyss Institute for Biologically Inspired Engineering and director of the Materials Research Science and Engineering Center at Harvard.

“These observations may also have implications in external means of monitoring cell fate, which may be important for future biotech applications.”

Future studies are needed to examine the effects of varied changes in volume, as well as if cell volume or external cues are the dominating factor in the fate of stem cells.

The future of regenerative medicine

Stem cells sit at the forefront of regenerative medicine, providing researchers and clinicians with the potential to repair or replace damaged tissue and organs.

With the ability to develop into any type of specialized cell — from a muscle cell to a red blood or brain cell — stem cells hold the potential to treat various diseases and conditions, from heart disease to tooth loss. Bone marrow transplantation, one form of stem cell therapy, is already in widespread use.

Stem cells also may aid in drug development and the understanding of how cancer and birth defects occur.

Learning what causes differentiation among these cells will help researchers generate methods that influence their behavior and, ultimately, develop new therapies.

Aside from physical cues such as cell stiffness or volume, stem cell differentiation can be influenced by a number of biological factors, pharmaceutical drugs or biophysical agents, such as light, ultrasound and radio frequencies.