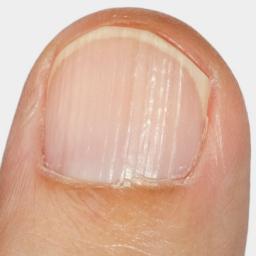 There are times when ridges in the fingernails could be a sign of an underlying condition, especially if the ridges are horizontal.

A thorough diagnosis can help people and their doctors decide on a proper treatment plan in each case.

Types of fingernail ridges and their causes

Ridges on the fingernails may be vertical or horizontal. Usually, the cause is aging.

Just as the skin may show signs of aging, the fingernails and nail beds may also start to change with age. The nails themselves may also:

The nails may also start forming any number of vertical ridges as they grow. These ridges run from the tip of the finger down to the bottom of the nail and are not usually a cause for concern.

A trip to a dermatologist may still help in cases where symptoms cause pain or unsightly nails.

Other causes of vertical ridges

Anemia can cause vertical ridges to appear and may also make dents appear in the nail.

A splinter hemorrhage is a tiny blood clot that can create a vertical discoloration beneath the nail. If the person does not know what caused the bleeding from the hemorrhage, they should consider a trip to the dermatologist.

Other medical disorders that can cause vertical ridges to appear in the nail include:

Ridges that appear alongside other symptoms such as rough or brittle nails that are not caused by aging may be a sign of other medical disorders and should be diagnosed by a doctor.

Beau’s lines are nail ridges that run horizontally across the fingernail. These ridges are often deep, and multiple lines may appear across the nail.

Horizontal ridges are often a sign of an underlying condition that requires diagnosis and treatment. In some cases, the nails may stop growing until the condition is treated.

Beau’s lines may also appear in people who have undergone chemotherapy. People who have had mumps or syphilis may also get horizontal ridges in their fingernails and toenails.

Anyone who develops horizontal nail ridges should see their doctor for a diagnosis as soon as possible.

Other causes and associated symptoms

Damage to the nails through injury can cause ridges to develop. This is usually temporary, and will heal with time.

Many people with psoriasis experience problems with their fingernail and nail bed.

Eczema may also cause ridges and discoloration in the nail along with other symptoms on the skin.

Digestive disorders that affect the absorption of nutrients may also influence the nails.

Crohn’s disease, celiac disease, and ulcerative colitis are all examples of disorders that can make it difficult for the body to absorb nutrition from food.

If the body does not have the proper building blocks to make new cells, the skin and nails may suffer.

An accident such as dropping a book on the fingernail can cause bruising to form underneath the nail and may temporarily change its shape.

Bruising can cause reddish brown spots to form underneath the nail, which will go away gradually as the cells heal and the nail grows out.

If discoloration shows up without an accident or injury, it may be a sign of something more serious. Dark brown, purple, or red spots under the nails may be signs of serious conditions, such as melanoma or endocarditis.

Fingernail ridges that appear suddenly or appear with any other symptoms should be examined by a doctor as soon as possible.

Typically, nail injuries do not require treatment. However, if damage to the nail is extensive, a person should see their doctor immediately.

During the diagnosis, the doctor will ask the person how the injury happened or how long they have noticed symptoms. They may also ask about the person’s medical history and any other symptoms they may have.

If doctors suspect an underlying disorder is causing fingernail ridges or other symptoms, they will often order additional tests and take blood or urine samples.

What are the treatment options?

Treatment will be based on the underlying cause of the nail ridges. For example, treatment may include applying topical ointment or lotion to the hands if the cause is eczema.

Ridges in the fingernails are often a sign of an underlying condition. Treatment typically focuses on resolving the condition that is causing the nail ridges to appear.

For instance, if a skin condition such as eczema is causing ridges in the fingernails, the dermatologist will try to reduce the symptoms of eczema by prescribing topical treatments.

In doing so, the cells controlling fingernail creation may be healed, which would help the ridges disappear.

Although not every person will develop ridges in their fingernails as they age, unfortunately, there is no known way to prevent them from forming.

Eating a varied and healthful diet may be a positive step towards providing the body with the fuel it needs to create strong, healthy nails and prevent fingernail ridges

When fingernail ridges develop as a result of a person aging, they are harmless. However, anyone that notices any additional symptoms or changes in the nail that accompany the ridges should visit a doctor or dermatologist.