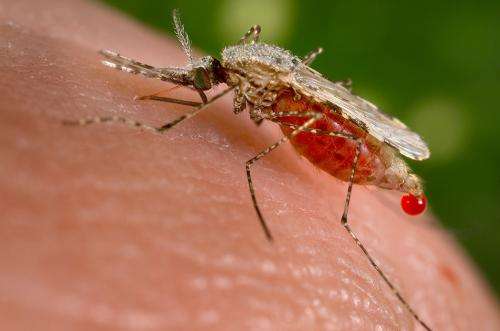 Indiana University School of Medicine researchers have identified a way to block the ability of parasites that cause malaria to shield themselves against drug treatments in infected mice—a finding that could lead to the development of new approaches to combat this deadly disease in humans.

Malaria continues to be one of the most devastating diseases in the world. According to the World Health Organization, nearly half of the world’s population is at risk of malaria, and in 2015, there were roughly 212 million new cases of malaria, with an estimated 429,000 malaria-related deaths worldwide.

Malaria is caused by a single-celled parasite called Plasmodium that is transmitted during a mosquito bite. Plasmodium parasites have evolved resistance to key antimalarial medications traditionally used to fight the disease, which is why there is an urgent need to identify new treatment strategies.

Artemisinin is the active ingredient in the sweet wormwood bush that has been used for centuries as an antimalarial treatment in China. Today, artemisinin and its derivatives (known as ARTs) are among the most potent antimalarial medications used as the frontline treatment in more than 100 countries.

While ARTs can rapidly reduce the number of parasites in the blood, treatment with artemisinin fails for many patients because it appears that some parasites can enter a latent stage that allows them to ride out the presence of the drug. When patients finish their medication, these latent parasites reactivate and cause a relapse of the infection. This phenomenon is deemed a treatment failure, and it is emerging as a major clinical problem in battling malaria.

In a collaborative study published Dec. 13 in Cell Host & Microbe, a team of researchers led by Research Assistant Professor Min Zhang, PhD, of the IU School of Medicine Department of Pharmacology and Toxicology and the Department of Pediatrics, identified the molecular mechanism leading to ART treatment failures.

Their findings build on work initiated in the laboratory of Victor Nussenzweig, PhD, at New York University School of Medicine, where Dr. Zhang investigated whether the latency seen in malaria parasites treated with ART involves a stress pathway that regulates protein production. Professors William Sullivan, PhD, and Ronald Wek, PhD, at IU School of Medicine first connected this stress response pathway to parasite latency in their studies of a related parasite called Toxoplasma gondii.

According to Dr. Sullivan, who explains more in a blog post, the stress response pathway centers on a protein called eukaryotic translation initiation factor-2 (eIF2), which is responsible for starting protein synthesis. When a cell is stressed, eIF2 is chemically modified by eIF2 kinases, a special group of proteins that switch the types of proteins made in the cell.

Dr. Zhang discovered that ART treatment caused Plasmodium’s eIF2 to be modified by a kinase called PK4. When PK4 was blocked either genetically or with a kinase-blocking drug, the parasites could no longer enter their latent stage when hit with ART—making the treatment more successful against malaria by preventing treatment failure.

“This is a wonderful example of basic research leading to new ways to combat deadly diseases such as malaria,” said Dr. Sullivan, a corresponding author and senior investigator on the study. “Inhibition of this eIF2 kinase might solve the problem of latent infections caused by other clinically important parasites as well.”