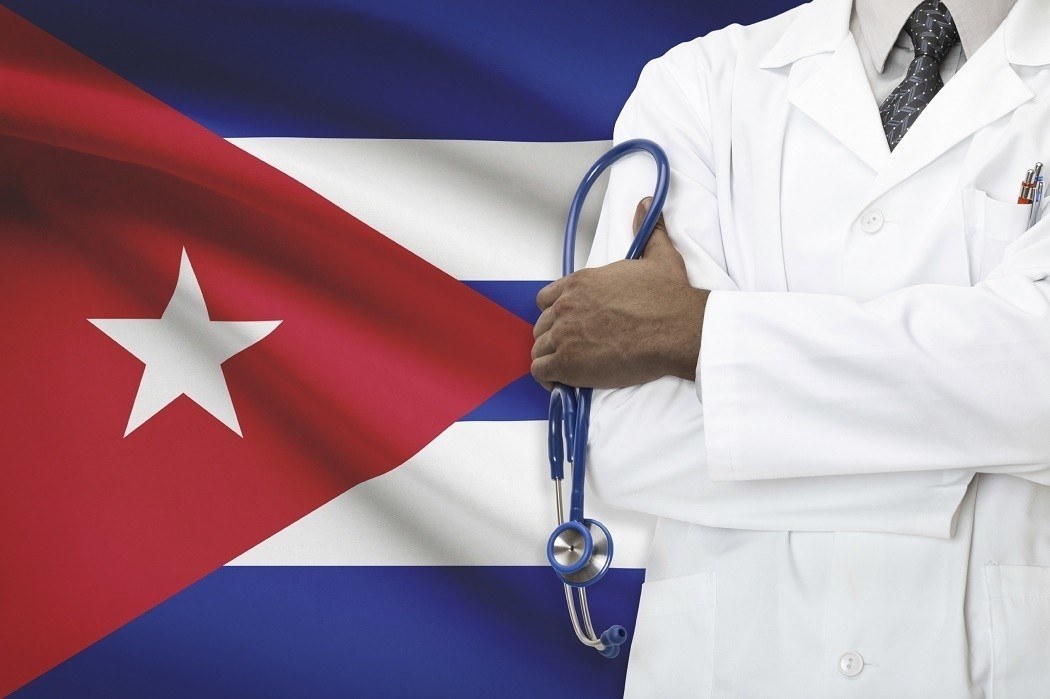 Cuba now exports vaccines, diagnostic kits and drugs developed by its Center for Genetic Engineering and Biotechnology — the largest research center on the island — to 51 countries. But except for a small shipment for a clinical trial, the United States isn’t one of them.

Scientists at this sprawling research center in Havana’s Cubanacan section would like to change that. They see the United States as a natural market where diabetics and those suffering from various forms of cancer are losing out on treatments developed at the pioneering center that is known by its Spanish acronym as CIGB.

For cash-strapped Cuba, the equation is simple: The United States is not only close but has an enormous number of patients that could benefit from drugs and vaccines developed against all odds at the island’s premier research center — and exporting those products to the U.S. market could generate revenue.

“Sometimes I don’t understand why our countries aren’t taking advantage of such a good opportunity to work together,” said Manuel Rafael Raices Perez-Castaneda, a biologist and business development director at the center. “We face similar problems. Why not focus on the problems we can solve together and not the differences?”

Cuban researchers have been able to develop treatments that are showing potential around the world — and despite the embargo and the chill in U.S.-Cuba relations, they’re very interested in the U.S. market. The first clinical trial of a Cuban-developed vaccine for lung cancer is underway at the Roswell Park Cancer Institute in Buffalo, N.Y.

Even though 99 patents for Cuban biotech products had been approved by the U.S. Patent and Trademark Office through December 2015, no Cuban drugs are currently registered with the U.S. Food and Drug Administration or sold in the United States.

The registration process is complex and expensive, so Cuba has chosen to enter other markets where it is easier to gain access. Despite Cuba’s desire to get its medicines into the U.S. market, the country has been experiencing domestic pharmaceutical shortages for months and it needs investment to ramp up its pharmaceutical industry.

Cubans say they often get up before dawn and stand in line trying to fill prescriptions or resort to the black market. A recent article in Cuba’s Bohemia magazine blamed the shortages on lack of financing for production, shortages of raw materials, “indiscipline” in the supply chain and lack of controls at the pharmacy level.

Meanwhile, research continues at the CIGB. A vaccine for hepatitis B (Hebernasvac) and Cuban treatments for diabetic foot ulcers and skin cancer are among the Cuban medical innovations that researchers say have the most potential in the U.S. market. But before they can be commercialized, they must undergo U.S. clinical trials approved by the Food and Drug Administration.

Cuban scientists say one of their most promising products is Heberprot-P, which is injected as a treatment for diabetic foot ulcers. More than 30 million Americans — about 9.4 percent of the U.S. population — are diabetic, and Cuban researchers say Americans need Heberprot-P as a way to prevent one of the most devastating complications of diabetes: deep ulcers that can penetrate to the bone and lead to gangrene.

One in four U.S. diabetics will develop foot ulcers at some point in their lifetime.

Diabetes often causes nerve damage (neuropathy), and because diabetic patients often lose sensation in their feet and legs, they may not notice a blister or sore until it is infected and difficult to treat. Ulcerations are one of the leading causes of hospitalization for diabetic patients and are often a precursor to amputation.

Every year there are about 108,000 Americans who reach this point and have amputations due to diabetic complications, according to the latest report from the Centers for Disease Control and Prevention.

“Using Heberprot-P could prevent an enormous number of amputations in the United States,” said Merardo Pujol Ferrer, business development director for Heber Biotec, the marketing company for CIGB products. Heberprot-P has won patent approval in at least 18 countries, including the United States.

Heberprot-P, which contains recombinant human epidural growth factor (EGF), is injected deep into the wound and essentially creates a non-diabetic micro-environment in the foot that aids in healing. Cuban clinical studies have found that it accelerates healing with no serious side effects and reduces the chances of amputation.

The Cuban scientists were eager to show their before and after pictures. The first showed a gaping red ulcer on a patient’s foot. The second, taken after 83 days, showed that it had cleared up. Over the past three years, around 13,000 patients have been treated with Heberprot-P in Cuba and there have been fewer than 500 major amputations, according to CIGB researchers.

More than 50,000 Cuban patients have been treated with the product overall and nearly 250,000 patients worldwide.

Entrepreneur Richard Branson, founder of the Virgin Group, is among the advocates of Heberprot-P.

“Put simply, Americans are losing lives because they can’t access the scientific development in Cuba, while Cubans are losing opportunities for further advancements through collaboration with the U.S.,” Branson wrote in a November blog post. “By putting health and science over politics, a lot of lives could be saved.”

Branson was introduced to the Cuban research by none other than Fidel Antonio Castro Smirnov, one of the late Fidel Castro’s grandsons and a nuclear physics professor at the University of Computer Sciences in Havana. He filled Branson in during the serial entrepreneur’s recent trip to Cuba.

Cuba began using Heberprot-P injection treatment domestically in 2007. “We’re cutting off the fire before it reaches the forest,” said the CIGB’s Raices. Now hardly anyone in Cuba has these big ulcers because when they’re still small they go running for the doctor.”

Diabetes, if not adequately controlled, can cut people’s life span by a dozen years, said Raices. But the Cuban program, he said, has reduced the life span reduction to only 1.2 years.

Over the years, Treasury’s Office of Foreign Assets Control granted a few licenses to import Heberprot-P for clinical trials, but it’s unclear if any research was actually carried out in the United States.

In 2013, former South Florida Democratic Rep. Joe Garcia supported efforts to bring Heberprot-P to the U.S. for trials. Although Garcia caught political flak from fellow members of the Cuban-American congressional delegation, he said at the time: “This is something that can maybe save lives. This is about medicine. I’m not going to be the guy who decides that people will suffer because of the embargo.”

But under a change in regulations in October 2016, a U.S. company no longer needs to request a specific OFAC license for importation of Cuba pharmaceuticals if the FDA approves trials or if it greenlights commercial sales. A few months before last year’s rule change, OFAC granted a small Ohio company, Mercurio Biotec, a license to import the diabetic ulcer therapy for clinical trials. Herald efforts to reach the company via email and phone for comment were unsuccessful.

“Evidently it’s a lot more difficult now (with the Trump administration),” he said. “Before, the door was open.”

John Kavulich, president of the U.S.-Cuba Trade and Economic Council, said lack of market access is at least partially Cuba’s fault. “I’m incredulous that they’d like to have more opportunities for their exports. They had two years with the Obama administration and the Cuban government did virtually nothing when they could have made something happen.”

Kavulich said the Obama administration also could have done more to foster business relationship with Cuba. “So little was done that it has allowed the Trump administration to have a landscape in which it can be disruptive” and erode the relationship, he said.

Despite the U.S. trade embargo, there is some trade in medicine and medical equipment between Cuba and the United States. But it’s not easy.

Although cash-in-advance payments are no longer required for health care products, there are conditions such as on-site verification and certification that exports are to be used only for the benefit of the Cuban people that make some companies shy away from the additional hurdle. U.S. law also requires a reasonable expectation that any U.S. export not be used for torture or human rights abuses.

During a November speech at the United Nations, Cuban Foreign Minister Bruno Rodriguez complained that in the last year Medicuba, Cuba’s importer and exporter of medical supplies, had made requests to purchase supplies from 18 U.S. companies that had refused or never responded to Cuban inquiries.

Those who did respond often cited the embargo as the reason they couldn’t do business with Cuba, he said. But under exceptions to the embargo, food and agricultural products and medicines and medical equipment and supplies have been eligible for export to the island since 1992. Last year, $6.12 million worth of U.S. healthcare products were exported to Cuba, and through October this year $4.59 million worth of such products were sent. Currently there are no imports of Cuban drugs except the CIMAvax for the clinical trial.

“To take it to the next level, Cuba needs to link up to global pharmaceutical and biotech companies,” said Richard Feinberg, a professor of international economic policy at the University of California, San Diego.

Besides Heberprot-P, the CIGB scientists also would like to see these Cuban innovations in the U.S. market: a therapy for non-melanoma skin cancer (CIGB-128) that contains alpha and gamma interferons and is injected three times a week; a hepatitis B vaccine that is widely used in Cuba and has reduced the annual cases of the disease to only about two dozen; and Proctokinasa, a treatment for hemorrhoids.

CIGB-128 is now being used in Cuban policlinics that see a lot of agricultural workers who spend many hours in the sun. “In 60 percent of the cases the lesions disappear,” said Raices. “You know we could create a very positive relation between Cuba and Florida for these treatments.”