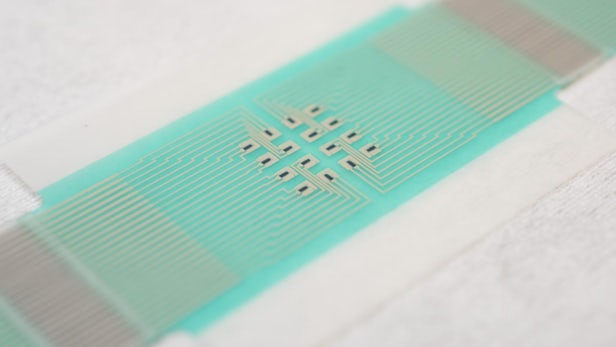 For millions of diabetics, performing finger-prick blood tests to monitor blood glucose levels is an unpleasant part of daily life. If a new glucose-monitoring adhesive skin patch reaches commercialization, however, such jabs may become a thing of the past.

Developed by scientists at the University of Bath in the UK, the graphene-based device is worn against the skin without piercing its surface. It incorporates an array of miniature sensors, which utilize a small electric current to draw glucose out from the interstitial fluid that’s located between cells within the body-hair follicles – each sensor covers an individual follicle.

The extracted glucose collects in tiny reservoirs, where it’s measured. This results in accurate blood glucose readings, which can be taken as often as once every 10 to 15 minutes over a period of several hours. It is hoped that once commercialized, the inexpensive disposable device could wirelessly transmit those readings to an app on the user’s smartphone, providing alerts when necessary.

“A non-invasive – that is, needle-less – method to monitor blood sugar has proven a difficult goal to attain,” says Bath’s Prof. Richard Guy. “The closest that has been achieved has required either at least a single-point calibration with a classic ‘finger-stick,’ or the implantation of a pre-calibrated sensor via a single needle insertion. The monitor developed at Bath promises a truly calibration-free approach.”

In lab tests, the patch has been successfully used to monitor fluctuating blood glucose levels both in healthy human volunteers, and on pig skin with glucose levels representing the range seen in human diabetics. The scientists are now planning on optimizing the number of sensors in the patch, demonstrating its functionality over a 24-hour wear period, and performing clinical trials.

A paper on the research was recently published in the journal Nature Nanotechnology.