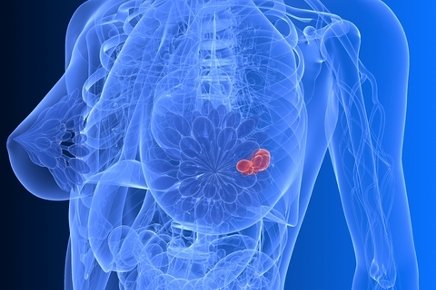 Recent research and genomic studies have revealed a number of genes that accumulate somatic, or non-inherited, mutations and alterations in estrogen receptor positive (ER+) breast cancer. However, while a few alterations are quite common and relatively well understood, many genes are mutated in less than 5 percent of cases overall. As a result, little has been known about how uncommon mutations impact disease outcome. To address this problem, researchers from Baylor College of Medicine, in collaboration with Washington University in St. Louis and the University of British Columbia, conducted the largest analysis to date, involving more than 2,500 ER+ breast cancer cases, to establish associations between rare somatic mutations and prognosis. The study is published in Nature Communications.

“In ER+ breast cancer, how somatic gene mutations impact the long-term effects of tamoxifen treatment is poorly understood,” said Dr. Meenakshi Anurag, instructor and cancer informatics investigator in the Lester and Sue Breast Center at Baylor. “In order to study somatic mutations and understand their impact on prognosis, we sequenced 83 genes in a total of 953 primary ER+ breast cancer samples.”

To investigate both young and older patients, 625 samples were from postmenopausal women and 328 were premenopausal women diagnosed over two decades ago, providing the opportunity to examine the relation between cancer mutations and the long-term risk of relapse. DNA hybrid capture, sequencing of 83 genes and rigorous bioinformatics analysis, was used to compensate for the old age of the samples and lack of matched normal DNA, which is normally required for studies of this kind.

“We were subsequently able to validate our results in an independently published cohort called METABRIC, comprising approximately 1,400 ER+ breast cancer patients, focusing on the genes that overlapped between the two studies,” Anurag said.

The research team reports consistent associations with outcomes for two relatively common mutations in two tumor suppressor genes called MAP3K1 and the TP53 gene, which had opposing effects. MAP3K1 is associated with favorable outcomes, and TP53 with poor prognosis. These results were expected from previous studies. However, early relapse and deaths were found to be associated with uncommon mutations in three genes, DDR1, a collagen receptor, PIK3R1, a signaling suppressor, and NF1, a negative regulator of the RAS oncogene.

“Low-frequency mutations, such as DDR1 and NF1, need to be paid attention to, because although these mutations are considered rare, they associate with early relapse and death, which makes them much more common in patients who unfortunately die from the disease and, thus, could be critical therapeutic targets. Their identification also gives us very important molecular clues into the nature of aggressive tumor behavior,” said Dr. Matthew Ellis, McNair Scholar and director of the Lester and Sue Smith Breast Center, part of the NCI-designated Dan L Duncan Comprehensive Cancer Center at Baylor.

“When we don’t cure any disease, it is because we have not made the right diagnosis at a fundamental molecular level. ER+ breast cancer has a wide variety of outcomes and molecular characteristics, and consequently there simply is not a ‘one size fits all’ treatment solution. Ultimately, progress depends on a fundamental understanding of what is driving the cancer in each individual case, and tumor DNA sequencing is going to be part of that diagnostic puzzle,” added Ellis, who also is the associate director of precision medicine in the Dan L Duncan Comprehensive Cancer Center at Baylor.