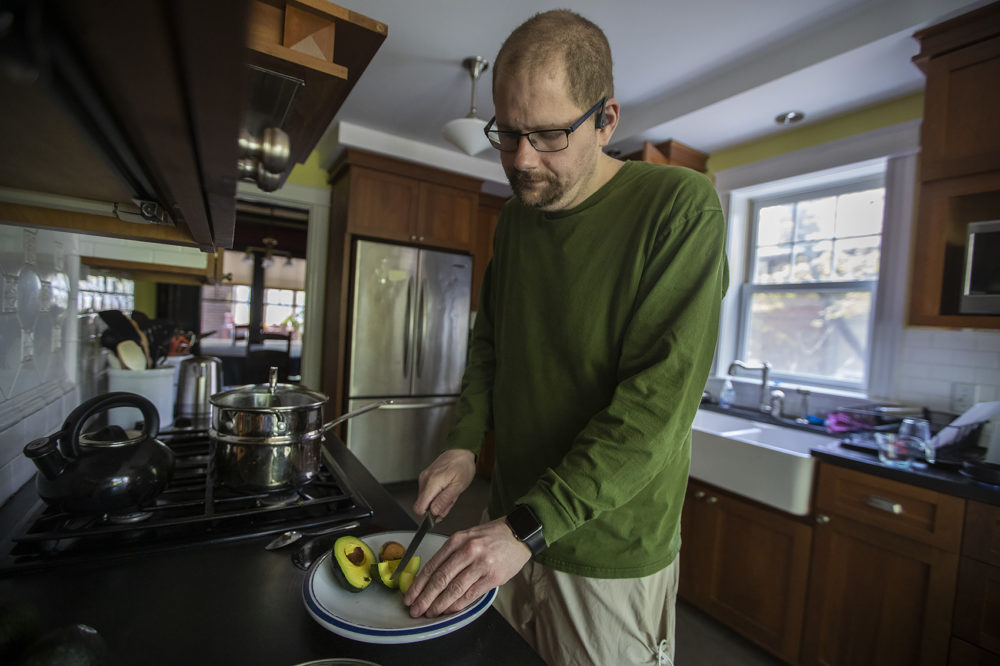 Dan was 19 when he was hospitalized for schizophrenia. He was prescribed fistfuls of daily medication and, as a side effect, quickly packed on 100 pounds.

“I weighed 340 pounds,” says Dan, who asked to withhold his last name because of the stigma around mental illness. “I’m about 6 feet tall. That’s pretty heavy.”

His treatment and weight remained largely unchanged for more than a dozen years before he slowly began taking steps toward recovery. He took up karate five years ago, getting regular exercise.

Then, his doctor at McLean Hospital in Belmont prescribed a new diet: He helped Dan cut out nearly all carbohydrates, replacing them with healthy fats and some extra protein. The diet took some getting used to, but after three years, it has become routine. If he goes out with friends, he’ll order a salad, or just sip a water and eat when he gets home.

The diet is part of a growing trend in medicine: prescribing certain foods — or telling patients to eliminate them — to improve health.

Three studies published in the last few weeks show the range of new research connecting food to health. In the journal Science, researchers at Beth Israel Deaconess Medical Center conclude that a molecule in vegetables like broccoli, cauliflower, brussel sprouts and kale really may fight cancer. It seems to help reactivate a gene that suppresses many tumors.

In another new study of 50,000 older women followed over two decades, those who ate a relatively low-fat diet — rich in fruits, vegetables and whole grains — had a lower risk of getting and dying from breast cancer. And in a third, tiny study, fasting for 15 hours a day — as Muslims do during the holy month of Ramadan — seemed to improve metabolism, boosting levels of proteins that play a role in maintaining cell health and the body’s response to insulin.

“Our food system right now is making us sick. It’s absolutely the number one cause of poor health in our country.”

Darius Mozaffarian, dean of the Friedman School of Nutrition Science and Policy at Tufts University

The trend isn’t entirely new. The ketogenic diet has been prescribed for children with epilepsy for a century. Giving up nearly all carbohydrates — bread, pasta, even most fruits — forces the body to switch from burning sugars to burning fat. Somehow, this seems to correct electrical problems in the brains of many children with terrible epilepsy. Some go from hundreds of seizures a week to just a few; in others, seizures stop entirely.

People who struggle with mental illness and obesity may overeat to get adequate energy, Palmer says. Their brain cells might not process fuel from sugar properly because of genetics, a poor diet or stress from a toxic childhood. To feed their brains, they often turn to the diet plan favored by most Americans: lots of processed foods, sugar and easily digested carbs.

“Their cells are putting out an SOS signal: ‘Feed me, feed me — go eat some more,’ ” Palmer says. But all that extra glucose still can’t get into their cells, so they’re overeating and gaining weight, but still “not getting quite enough energy.”

Palmer thinks because a strict ketogenic diet forces the body to rely on a different energy source, it does a better job of getting fuel into those brain cells. As brain function improves, very early evidence suggests it can reduce psychosis, anxiety and other symptoms of mental illness.

“The good news in all of this is that these things are reversible. Metabolism can be changed by what we eat and by exercise,” says Palmer, adding that he’s involved in all three of the ketogenic diet and mental health studies currently underway worldwide. “That is a really exciting area of research.”

In a different study at Northeastern University, researchers are using big data to better understand how individual nutrients affect the body and brain.

Albert-László Barabási, a computer scientist at Northeastern, says that of the 17,000 chemicals identified in food, we only know how about 150 of them affect the body. So he’s combing published research across the world to figure out what the rest of them do.

“We need to understand which of the chemicals affect your health, the particular disease you have and hence we can give you very specific advice. That’s exactly why we’re doing this,” he says.

Barabási hopes to use that information to help doctors and other researchers identify what specific foods individuals should be eating – or not eating. Perhaps at some point, he says, this could be personalized, so someone whose body doesn’t process certain foods well could be told to avoid them.

“If I could just say, ‘Hey, you don’t have to change all your eating patterns, but leave out these two ingredients from your food,’ I think it would be a regimen that would be much easier to follow by most individuals,” Barabási said.

There’s no question that something has to change in the American diet, says Darius Mozaffarian, dean of the Friedman School of Nutrition Science and Policy at Tufts University.

Obesity is part of the problem, Mozaffarian says. But even people with a normal weight are developing diabetes, cancer, stroke and other health problems from bad eating habits.

“Our food system right now is making us sick,” he says. “It’s absolutely the number one cause of poor health in our country.”

Although nutritionists still quibble about the details, for the most part, they do know what’s best for us and what’s not. Vegetables, fruits, beans, nuts and some whole grains are healthy, Mozaffarian says; processed meats and other processed foods, white bread, chips and soda are not so good.

The idea of adding or eliminating just a few specific foods to improve our health doesn’t yet have widespread scientific support. But for Dan, now 35, a dramatic dietary change has made a dramatic difference.

After three years on the ketogenic diet, Dan is 140 pounds slimmer. He takes improv comedy classes and works two volunteer jobs. He’s even got his black belt in karate.

“I’m on about half the amount of meds that I was on when I started the ketogenic diet,” he says. “I feel great. Much better than I did.”

Both Dan and his doctor believe that other people can benefit, too.

“When it comes to diet and exercise,” says Dan, “I think that’s one area that’s way, way, still way overlooked in improvement of all types of ailments.”