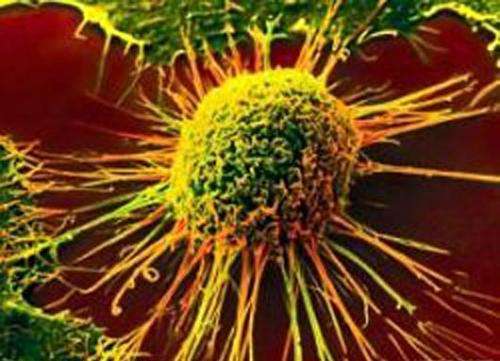 New research into a genetic mutation’s role in breast cancer could open new treatment options for lung cancer, according to a Michigan State University scientist.

“We sequenced the whole genome of breast cancer samples and found a driving mutation that hasn’t been recognized as important in lung cancer before,” said Eran Andrechek, a College of Human Medicine physiology professor. “This mutation has clear potential to identify lung cancer patients who should be receiving targeted therapy that’s already approved by the FDA.”

The study is published in the journal Nature Communications.

Using lab mice and computational analysis of sequenced genes, he and his colleagues learned that a mutation present—but apparently not consequential—in breast cancer turns out to inhibit growth of certain human lung cancer tumors. About 5% of lung cancer cases carry this mutation, he said.

That works out to some 11,000 people in the United States alone who could gain precious time from the most vicious of major cancers. “It’s not a cure,” he cautioned. “It has the potential to extend life span and increase quality of life for the patients.”

Andrechek and his team also found a number of genes that were amplified in mice and in human breast cancer and using CRISPR gene-editing technology, was able to stop cancer cells from spreading.

“When we used CRISPR to knockout two of these genes, we blocked migration and metastasis of the tumors,” Andrechek said. “In humans, we would do a drug screen to find FDA-approved drugs that would target the genes and block them.”

Breast cancer is the most common among women, as prostate cancer is among men. But with improved screening for those cancers, at least in the developed world, lung cancer kills more people than breast, prostate and colon cancer combined, according to the American Cancer Society. Overall, one in 15 men and one in 17 women will develop it in their lifetimes, with smokers at higher risk.

Andrechek said his next step is to better describe and manipulate the mutation’s effect on the protein that regulates cancer tumor growth, before any human clinical trials begin. He’s also working with another MSU laboratory to secure grant funding to apply the findings once again to breast cancerresearch.