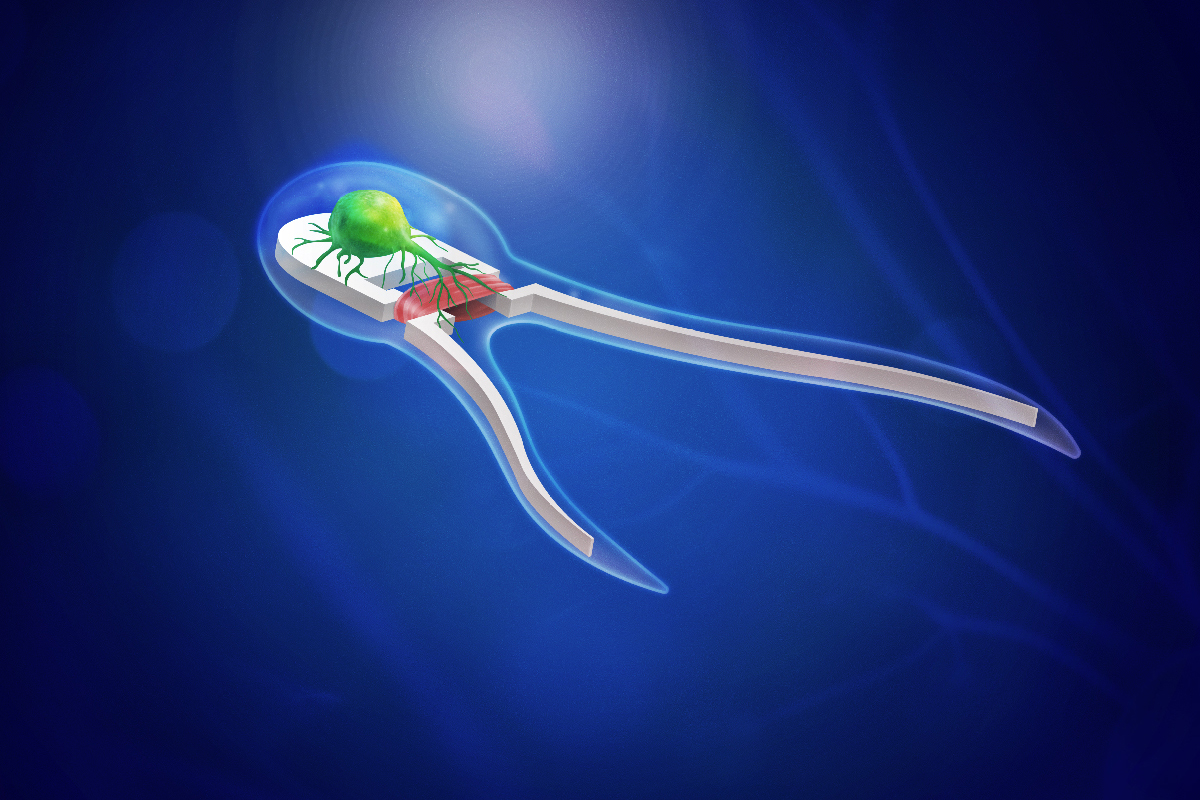 In 2014, research teams led by mechanical science and engineering professor Taher Saif and bioengineering professor Rashid Bashir at the University of Illinois worked together to developed the first self-propelled biohybrid swimming and walking biobots powered by beating cardiac muscle cells derived from rats.

“Our first swimmer study successfully demonstrated that the bots, modeled after sperm cells, could in fact swim,” Saif said. “That generation of singled-tailed bots utilized cardiac tissue that beats on its own, but they could not sense the environment or make any decisions.”

In a new study published in the Proceedings of the National Academy of Sciences and led by Saif, the researchers demonstrate a new generation of two-tailed bots powered by skeletal muscle tissue stimulated by on-board motor neurons. The neurons have optogenetic properties: Upon exposure to light, the neurons will fire to actuate the muscles.

“We applied an optogenetic neuron cell culture, derived from mouse stem cells, adjacent to the muscle tissue,” Saif said. “The neurons advanced towards the muscle and formed neuromuscular junctions, and the swimmer assembled on its own.”

After confirming that the neuromuscular tissue was compatible with their synthetic biobot skeletons, the team worked to optimize the swimmer’s abilities.

“We used computational models, led by mechanical science and engineering professor Mattia Gazzola, to determine which physical attributes would lead to the fastest and most efficient swimming,” Saif said. “For example, we looked at variations in the number of tails and tail lengths for most efficient design of the biohybrid swimmer.”

“Given the fact that biological actuators, or biobots, are not as mature as other technologies, they are unable to produce large forces. This makes their movement hard to control,” Gazzola said. “It is very important to carefully design the scaffold the biobots grow around and interact with to make the most out of technology and achieve locomotive functions. The computer simulations we run play a critical role in this task as we can span a number of possible designs and select only the most promising ones for testing in real life.”

“The ability to drive muscle activity with neurons paves the way for further integration of neural units within biohybrid systems,” Saif said. “Given our understanding of neural control in animals, it may be possible to move forward with biohybrid neuromuscular design by using a hierarchical organization of neural networks.”

Saif said he and his team envision this advance leading to the development of multicellular engineered living systems with the ability to respond intelligently to environmental cues for applications in bioengineering, medicine and self-healing materials technologies.

However, the team acknowledges that – like living organisms – no two biohybrid machines will develop to be exactly the same.

“Just like twins are not truly identical, two machines designed to perform the same function will not be the same,” Saif said. “One may move faster or heal from damage differently from the other – a unique attribute of living machines.”