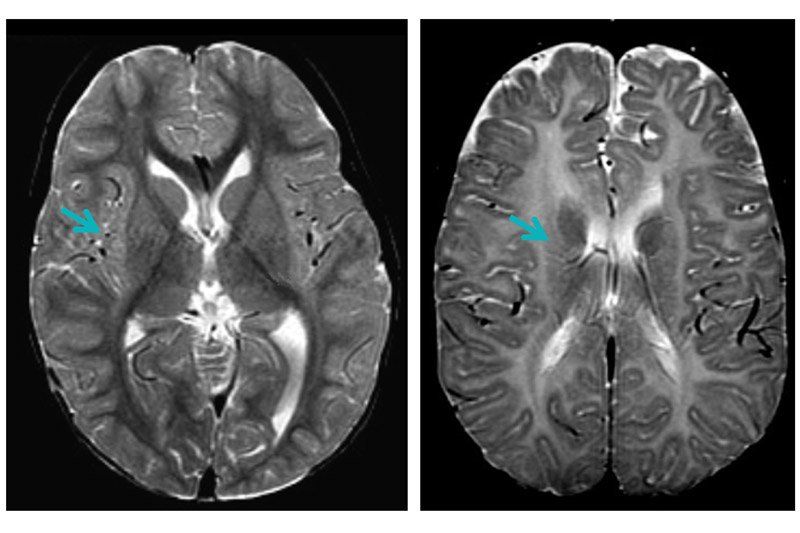 Two new studies by an international team of researchers report progress in using stem cells to develop new therapies for Pelizaeus-Merzbacher disease (PMD), a rare genetic condition affecting boys that can be fatal before 10 years of age.

Often diagnosed at birth with symptoms of weakness and breathing difficulties, the progressive neurological problems in PMD are caused by disruptions in the formation of myelin, a fatty layer of insulation covering nerve fibers that enables rapid, long-distance communication and makes up the brain’s white matter. But it has been unclear why myelination fails in PMD, and therapies to help restore this vital substance in the brain have so far remained out of reach.

For the past decade, scientists from UC San Francisco, Stanford University, and the University of Cambridge have been leading complementary efforts to use stem cells to develop novel therapies to reverse or prevent the loss of myelin in PMD patients. Two new studies, one published October 3, 2019, in Cell Stem Cell, and the other published August 1, 2019 in Stem Cell Reports, respectively report promising progress in using patient-derived stem cells to identify novel PMD drugs and in efforts to treat the disease by directly transplanting neural stem cells into patients’ brains.

“Together these studies advance the field of stem cell medicine by showing how a drug therapy could benefit myelination and also that neural stem cell transplantation directly into the brains of boys with PMD is safe,” said David Rowitch, MD, PhD, of UCSF and the University of Cambridge, who was a senior author on both studies. “We extend our utmost gratitude to the patients and families that participated in these studies, which we hope will one day lead to treatments for PMD.”

In the Cell Stem Cell study, Rowitch and Marius Wernig, MD, PhD, of Stanford University School of Medicine, set out to better understand the biological causes of PMD and to search for potential drugs that might reverse the loss of myelin. Led by postdoc Hiroko Nobuta, PhD, at UCSF, they collected skin cells from boys with PMD — several of whom also participated in the transplantation trial reported in Stem Cell Reports (see below) — and used induced pluripotent stem cell (iPSC) technology to turn these skin cells into brain cells that could be studied in laboratory dishes.

They discovered that myelin-producing cells called oligodendrocytes derived from PMD patients’ iPSCs die as a result of iron toxicity, pointing to a potential explanation for the failure of myelination during brain development in children with PMD. Among other findings, they showed that these PMD oligodendrocytes can be protected by removing the excess iron using an FDA-approved iron chelating agent called deferiprone. The investigators found deferiprone protected PMD oligodendrocytes and boosted myelin formation both in cells grown in laboratory dishes, as well as in a mouse model of PMD.

“This work demonstrates the value of stem cell technology to allow us to elucidate the mechanisms of disease and potential therapies in the lab,” said Wernig, who is co-corresponding author with Rowitch on the study. “Using patient-derived iPSCs, we could grow a patient’s own brain cells in the lab in order to better understand the biology of their disease and to directly test potential therapies.”

Based on these promising results, the researchers are planning clinical trials to test whether deferiprone could effectively slow or halt the progression of human PMD.

In 2010, Rowitch and Nalin Gupta, MD, PhD, from the Departments of Pediatrics and of Neurological Surgery at UCSF, launched a ground-breaking, first-in-human effort to test whether surgically implanting neural stem cells produced by Stem Cells Inc., which also provided financial support for the trial, into the white matter of PMD patients’ brains could help restore their missing myelin.

Conducted in four boys under the age of five with a severe form of PMD, their initial Phase 1 trial aimed to test the long-term safety of this procedure and, using brain imaging, to evaluate whether the transplants led to any changes in myelination. The investigators reported no adverse effects of the transplant 12 months following the procedure and observed changes on detailed MRI brain scans suggesting that myelination had occurred in the areas of transplantation.

In Stem Cell Reports, Gupta and Rowitch have now published a five-year follow-up on their stem cell implantation trial, reporting minimal adverse effects in the four subjects. The study also confirms that MRI changes consistent with myelination persisted in two of the four patients in the study. However, two of the patients exhibited immunological reactions to the neural stem cells, suggesting that immunosuppressive therapies may be required for future studies in order to prevent rejection.

“This study primarily demonstrates that cell transplantation can be performed safely in PMD patients,” said Gupta, who is chief of the Division of Pediatric Neurosurgery at UCSF and the study’s corresponding author. “There were also tantalizing clues that the transplanted cells survived and may be able to replace the myelin that these boys lacked, and important lessons for refining our approach in future studies.”

The clinical trial described in the Stem Cell Reports study was supported by Stem Cells, Inc.

Disclosures: One of the authors of the Stem Cell Reports study is an employee of Stem Cells Inc. The investigators declare no additional conflicts of interest.