Hadassah Medical Center has treated its first COVID-19 patient with a new “passive vaccine” that the hospital developed in conjunction with Israeli biopharmaceutical firm Kamada. According to Hadassah head Zeev Rotstein, “the patient reacted positively.”
He said: “She started to improve hemodynamically… We have our fingers crossed for the successful treatment of this patient.”
Though he could not share details about the patient, he described her as a young woman suffering from several underlying medical conditions. She has been hospitalized for weeks and is intubated. He said other treatments have not shown any results.
The antibody (immunoglobulin or IgG) concentrate was developed using plasma that Hadassah harvested from recovered corona patients: those who had the disease and now test negative for the virus.
Those who develop any virus, including the novel coronavirus, develop special antivirus proteins or antibodies in their plasma, which could therefore help sick patients cope with the disease. According to webmd.com, plasma is the yellow, liquid portion of blood that carries important proteins, minerals, nutrients and hormones to the right places in your body, and makes up more than half of the blood.
Passive immunization is when you are given antibodies formed by another patient who got the disease and developed them. An active vaccine, in contrast, is when you are injected with a dead or weakened version of a virus that tricks your immune system into thinking that you’ve had the disease, and your immune system creates antibodies to protect you.
Hadassah was able to collect 40 liters of plasma – enough to produce serum for as many as 70 patients – by working together with Jerusalem’s Beit Din Tzedek (Jewish court), which encouraged members of the haredi (ultra-Orthodox) community to donate their plasma after recovery. During the first coronavirus peak, Jerusalem’s haredi neighborhoods had some of the highest numbers of sick people.
Rotstein said that the vaccine, which could also be called a medicine, will likely be targeted toward COVID-19 patients whose situation is worsening and need a booster to fight the disease. However, it may also be used prophylactically in cases where a high-risk patient contracts coronavirus and the hospital wants to stop the disease’s progression.
In an interview with The Jerusalem Post earlier this year, Kamada CEO Amir London said that he believes his company is the first one globally to complete manufacturing of a plasma-derived IgG product for the treatment of COVID-19.
The company has two FDA-approved products already, including an anti-rabies treatment that is sold worldwide. And it is the sole supplier of anti-snake venom to the Health Ministry.
Although this is the first antibody concentrate administered to a patient, several Israeli patients have been treated with frozen plasma via transfusion. Back in April, a 29-year-old haredi coronavirus patient, who was in serious condition and being treated at Samson Assuta Ashdod University Hospital, reportedly stabilized after receiving multiple doses of plasma from a donor who recovered from coronavirus, a spokesperson for the hospital told the Post.
Patients were also treated at other hospitals, including Yitzhak Shamir Medical Center in Be’er Ya’acov.
MDA has been collecting plasma for more than 30 years. Plasma with antibodies was used to treat patients with SARS during the outbreak in 2002. In addition, Israel offered similar treatment to patients with West Nile fever.
Before being able to donate plasma, a patient must wait 14 days from the time he or she was confirmed as being negative for coronavirus via two separate swab tests. 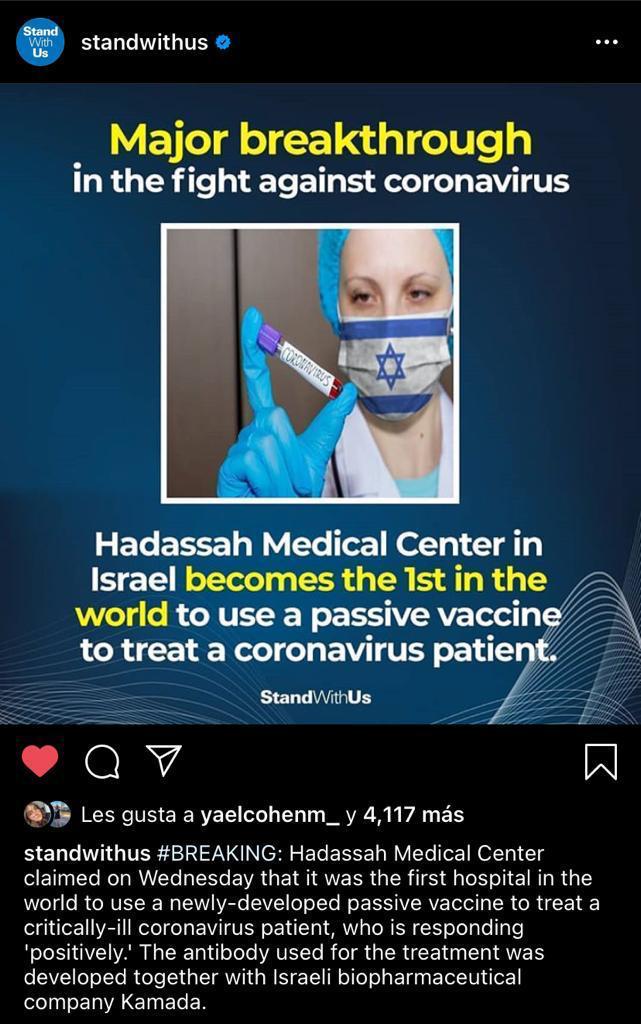