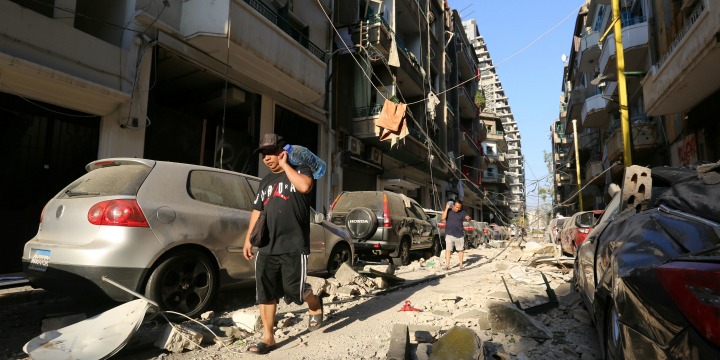 The head of one of the largest hospitals in northern Israel called on the Lebanese government on Wednesday to accept an Israeli aid offer after a deadly Beirut blast.

Following the massive explosion in Lebanese capital on Tuesday that killed over a hundred people and injured thousands more, Israel officially offered humanitarian assistance to Lebanon. Thus far, there has been no response.

In an interview with the Israeli daily Yediot Aharonot on Wednesday, Dr. Masad Barhoum — head of the Galilee Medical Center in Nahariya — urged Lebanon to let Israel provide help, and made a plea for peace between the two countries.

Referring to a crossing point on the Israel-Lebanon border, Barhoum said, “The State of Israel is ready to open a field hospital south of Rosh Hanikra, but it is much quicker to send patients to us so we can treat them.”

“I reached out to the president of Lebanon and said I was opening the doors of the hospital in order to receive any wounded person,” he added. “Every minute that passes, more people will die, and unfortunately, we know that in these incidents, there can be a collapse of the health system.”

Speaking in Arabic, Barhoum continued, “Perhaps this will be Lebanon’s last major disaster. Maybe we can help one another and bring peace.”

Barhoum was not alone in his call. Tel Aviv’s Sourasky Medical Center made a formal statement, saying, “We are ready to extend help in any way necessary and receive any wounded person.”

Addressing the Lebanese people directly, the medical center declared, “Be strong, and let us know only peace and brotherhood.”

Professor Yitshak Kreiss — director-general of the Sheba Medical Center in Tel Hashomer — stated that his hospital could take in Lebanese injured in the explosion, saying, “It is our duty to help anyone who needs it, and especially our neighbors.”

“We are prepared and ready for any task assigned to us,” he added.