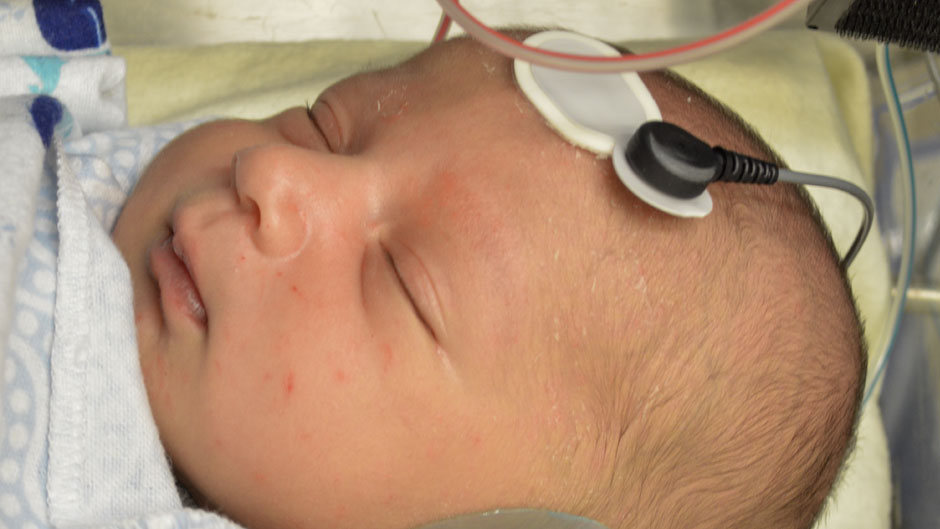 University of Miami and Harvard Medical School researchers are tweaking a standard hearing test to help detect autism at a very early age.

For years, researchers have known through numerous studies that hearing and other sensory systems of adults and children who have autism differ from children or adults without autism.

Now, University of Miami and Harvard Medical School researchers who explored responses to the standard hearing test administered to millions of newborns around the world, are closing in on a way to detect early indicators of autism—perhaps as early as at birth.

Published in the journal Autism Research, the findings could inform additional research and pave the way for evaluations that can better identify newborns with elevated autism risk by using standard hearing tests. The researchers note that such tests are already regularly and widely used to screen newborns for hearing loss. The tests work by measuring auditory brainstem response (ABR), which gauges how well a baby’s inner ear and brain respond to sound.

“We’re not at the point just yet where we’re telling clinicians to use ABR testing as a determinant for autism in babies,” said study co-author Elizabeth Simpson, an associate professor in the College of Arts and Sciences’ Department of Psychology, whose research focuses on understanding infant social cognitive development. “But we are saying that this study presents a promising direction in how ABR testing can be used as a method for precise autism detection at birth.”

“The importance for diagnosing autism early during infant and child development, when interventions can have the most impact, cannot be overstated,” said the study’s lead author Oren Miron, a research associate in the Department of Biomedical Informatics at Harvard Medical School. “Any additional tool that could clarify diagnostic clues would be invaluable in that regard.”

For the study, researchers analyzed large datasets of Florida infants who were screened for hearing impairments with ABR tests. Usually conducted in hospital maternity wards, the tests make computer recordings of the auditory nerve activity of babies who are exposed to sounds transmitted by electrodes placed on their scalps. The test sound is very mild and can be performed while the infants sleep.

The research team analyzed nearly 140,000 auditory recordings from babies born in Florida and matched the data with records from the Florida Department of Education indicating children with developmental disabilities. Ultimately, they found that newborns who were later diagnosed with autism had slower brain responses to sounds during their ABR tests.

With additional investigation, researchers hope to add additional layers to the ABR screenings so that doctors can use them not only to better understand a newborn’s hearing and risk for autism, but potentially other developmental problems—like speech,  language impairment, and Sudden Infant Death Syndrome—that could arise later.

“We know autism spectrum disorder is connected to how children process sound, so even if the child’s hearing is normal, it can still be processed differently,” Simpson added. “With better understanding of how ABR testing can be used to identify at-risk babies, we can flag children who might be at risk.”

In addition to Simpson and Miron, the interdisciplinary team of researchers on the study, “Prolonged Auditory Brainstem Response in Universal Hearing Screening of Newborns with Autism Spectrum Disorder,” include Kun-Hsing Yu and Isaac Kohane from Harvard’s Department of Biomedical Informatics; Rafael Delgado, Christine Delgado, Anibal Gutierrez, and Guangyu Zeng, from the University of Miami; and Jillian N. Gerstenberger from MEDNAX, Inc., Pediatrix Medical Group.

The researchers are recruiting participants in Miami-Dade County for a research study to further investigate the ability of ABR to identify increased risk for autism and other developmental disabilities. If you have a child (with or without autism) who is 1 to 5 years old and are interested in participating, contact [email protected] or 305-284-5520.

A Randomized Trial of Albumin Infusions in Hospitalized Patients with Cirrhosis

Could this hydrogel repair a broken heart?

Children May Start to Be Vaccinated for COVID-19 in the Fall: Why That’s Important