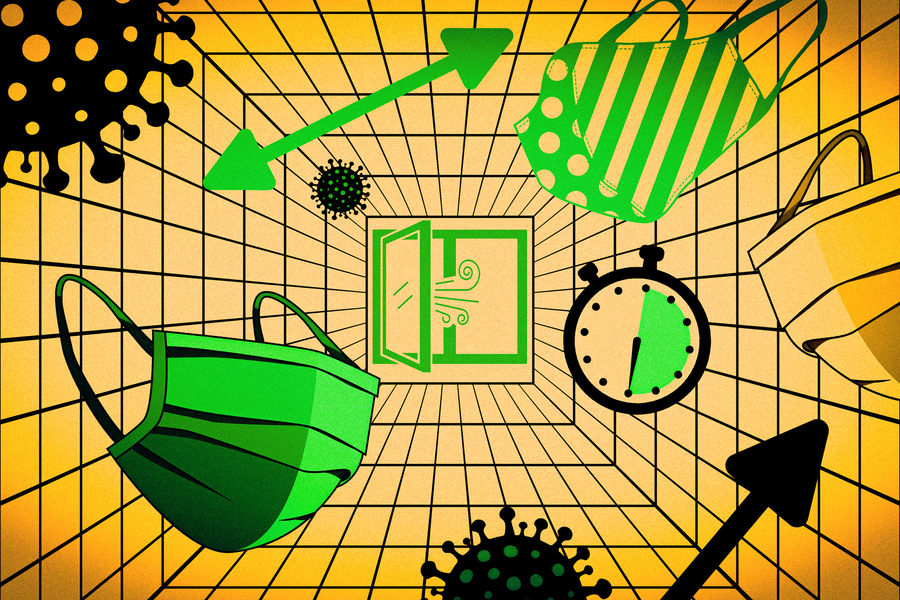 Two MIT professors have proposed a new approach to estimating the risks of exposure to Covid-19 under different indoor settings. The guideline they developed suggests a limit for exposure time, based on the number of people, the size of the space, the kinds of activity, whether masks are worn, and the ventilation and filtration rates. Their model offers a detailed, physics-based guideline for policymakers, businesses, schools, and individuals trying to gauge their own risks.

The guideline, appearing this week in the journal PNAS, was developed by Martin Z. Bazant, professor of chemical engineering and applied mathematics, and John W. M. Bush, professor of applied mathematics. They stress that one key feature of their model, which has received less attention in existing public-health policies, is providing a specific limit for the amount of time a person spends in a given setting.

Their analysis is based on the fact that in enclosed spaces, tiny airborne pathogen-bearing droplets emitted by people as they talk, cough, sneeze, sing, or eat will tend to float in the air for long periods and to be well-mixed throughout the space by air currents. There is now overwhelming evidence, they say, that such airborne transmission plays a major role in the spread of Covid-19. Bush says the study was initially motivated early last year by their concern that many decisions about policies were being guided primarily by the “6-foot rule,” which doesn’t adequately address airborne transmission in indoor spaces.

Using a strictly quantitative approach based on the best available data, the model produces an estimate of how long, on average, it would take for one person to become infected with the SARS-CoV-2 virus if an infected person entered the space, based on the key set of variables defining a given indoor situation. Rather than a simple yes or no answer about whether a given setting or activity is safe, it provides a guide as to just how long a person could safely expect to engage in that activity, whether it be a few minutes in a store, an hour in a restaurant, or several hours a day in an office or classroom, for example.

“As scientists, we’ve tried to be very thoughtful and only go with what we see as hard data,” Bazant says. “We’ve really tried to just stick to things we can carefully justify. We think our study is the most rigorous study of this type to date.” While new data are appearing every day, and many uncertainties remain about the SARS-CoV-2 virus’ transmission, he says, “We feel confident that we’ve made conservative choices at every point.”

Bush adds: “It’s a quickly moving field. We submit a paper and the next day a dozen relevant papers come out, so we scramble to incorporate them. It’s been like shooting at a moving target.” For example, while their model was initially based on the transmissibility of the original strain of SARS-CoV-2 from epidemiological data on the best characterized early spreading events, they have since added a transmissibility parameter, which can be adjusted to account for the higher spreading rates of the new emerging variants. This adjustment is based on how any new strain’s transmissibility compares to the original strain; for example, for the U.K. strain, which has been estimated to be 60 percent more transmissible than the original, this parameter would be set at 1.6.

One thing that’s clear, they say, is that simple rules, based on distance or capacity limits on certain types of businesses, don’t reflect the full picture of the risk in a given setting. In some cases that risk may be higher than those simple rules convey; in others it may be lower. To help people, whether policymakers or individuals, to make more comprehensive evaluations, the researchers teamed with app developer Kasim Khan to put together an open-access mobile app and website where users can enter specific details about a situation — size of the space, number of people, type of ventilation, type of activity, mask wearing, and the transmissibility factor for the predominant strain in the area at the time — and receive an estimate of how long it would take, under those circumstances, for one new person to catch the virus if an infected person enters the space.

The calculations were based on inferences made from various mass-spreading events, where detailed data were available about numbers of people and their age range, sizes of the enclosed spaces, kinds of activities (singing, eating, exercising, etc.), ventilation systems, mask wearing, the amount of time spent, and the resulting rates of infections. Events they studied included, for example, the Skagit Valley Chorale in Washington state, where 86 percent of the seniors present became infected at a two-hour choir practice

While their guideline is based on well-mixed air within a given space, the risk would be higher if someone is positioned directly within a focused jet of particles emitted by a sneeze or a shout, for example. But in general the assumption of well-mixed air indoors seems to be consistent with the data from actual spreading events, they say.

“When you look at this guideline for limiting cumulative exposure time, it takes in all of the parameters that you think should be there — the number of people, the time spent in the space, the volume of the space, the air conditioning rate and so on,” Bush says. “All of these things are kind of intuitive, but it’s nice to see them appear in a single equation.”

While the data on the crucial importance of airborne transmission has now become clear, Bazant says, public health organizations initially placed much more emphasis on handwashing and the cleaning of surfaces. Early in the pandemic, there was less appreciation for the importance of ventilation systems and the use of face masks, which can dramatically affect the safe levels of occupancy, he says.

“I’d like to use this work to establish the science of airborne transmission specifically for Covid-19, by just taking into account all factors, the available data, and the distribution of droplets for different kinds of activities,” Bazant says. He hopes the information will help people make informed decisions for their own lives: “If you understand the science, you can do things differently in your own home and your own business and your own school.”

Bush offers an example: “My mother is over 90 and lives in an elder care facility. Our model makes it clear that it’s useful to wear a mask and open a window — this is what you have in your control.” He was alarmed that his mother was planning to attend an exercise class in the facility, thinking it would be OK because people would be 6 feet apart. As the new study shows, because of the number of people and the activity level, that would actually be a highly risky activity, he says.

Already, since they made the app available in October, Bazant says, they have had about half a million users. Their feedback helped the researchers refine the model further, he says. And it has already helped to influence some decisions about reopening of businesses, he adds. For example, the owner of an indoor tennis facility in Washington state that had been shut down due to Covid restrictions says he was allowed to reopen in January, along with certain other low-occupancy sports facilities, based on an appeal he made based in large part on this guideline and on information from his participation in Bazant’s online course on the physics of Covid-19 transmission.

Bazant says that in addition to recommending guidelines for specific spaces, the new tools also provide a way to assess the relative merits of different intervention strategies. For example, they found that while improved ventilation systems and face mask use make a big difference, air filtration systems have a relatively smaller effect on disease spread. And their study can provide guidance on just how much ventilation is needed to reach a particular level of safety, he says.

“Bazant and Bush have provided a valuable tool for estimating (among other things) the upper limit on time spent sharing the air space with others,” says Howard Stone, a professor of mechanical and aerospace engineering at Princeton University who was not connected to this work. While such an analysis can only provide a rough estimate, he says the authors “describe this kind of order of magnitude of estimate as a means for helping others judge the situation they might be in and how to minimize their risk. This is particularly helpful since a detailed calculation for every possible space and set of parameters is not possible.”