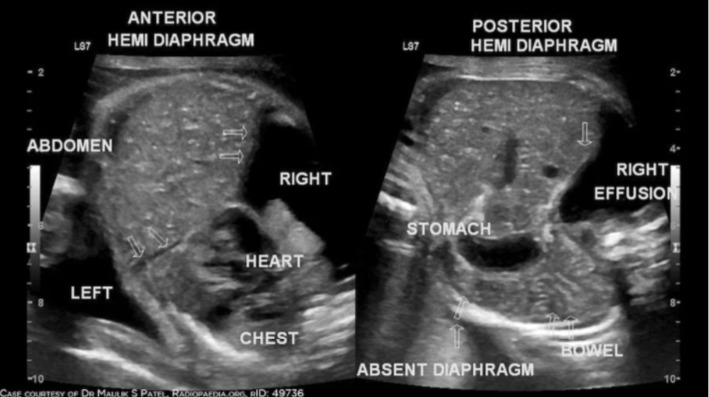 Fetoscopic endoluminal tracheal occlusion (FETO) resulted in higher survival rates among babies with severe diaphragmatic hernia on the left side, according to a randomized trial.

Fetuses with severe left diaphragmatic hernia, a condition that disrupts normal airway and pulmonary vascular development, had more than double the chances of surviving to discharge from the NICU after they underwent FETO between 27 and 29 weeks’ gestation, compared to fetuses that received expectant care (RR 2.67, 95% CI 1.22-6.11), reported Jan Deprest, MD, PhD, of University Hospitals Leuven in Belgium, and colleagues.

Infant survival rates in the FETO group were identical up to 6 months after the procedure, the researchers wrote in an early edition of the New England Journal of Medicine.

The prevalence of severe diaphragmatic hernia is 1 in 4,000 infants, with around 85% of the defects occurring on the left side. Deprest and colleagues stated that the condition is associated with high rates of neonatal death from respiratory failure or pulmonary hypertension, as the hernia blocks a fetus’s airway and can disrupt lung growth.

Fetal lung growth can be stimulated by tracheal obstruction, the researchers noted. During FETO, clinicians prenatally insert a small, inflatable balloon into a fetus’s trachea, which can be done while the mother is under local anesthesia. A few weeks after insertion, the balloon is removed.

Deprest said that observational data previously indicated that FETO may increase survival rates among fetuses with congenital diaphragmatic hernia, but this randomized trial was able to confirm that benefit. Now, he said, researchers are looking into ways to optimize timing of diagnosis.

“To have choices, parents need to have a prenatal diagnosis, and it is better to have that by end of the second or beginning of the third trimester,” he told MedPage Today.

Additionally, the researchers conducted another study published in the New England Journal of Medicine evaluating the effect of the procedure on fetuses with moderate congenital diaphragmatic hernia on the left side. The group found no benefit of FETO when performed between 30 and 32 weeks (RR 1.27, 95% CI 0.99-1.63, P=0.06).

“To me, it was surprising that there was a difference in the effect,” Deprest said. “But in retrospect, this probably has to do with the fact that we did the operation later,” he added, noting that in fetuses with a severe condition, the procedure was likely to be performed at least a week earlier than those with moderate illness.

In an accompanying editorial, Francis Sessions Cole, MD, of the Washington University School of Medicine in St. Louis, said that the data from this trial increase our understanding of FETO and may help inform counseling for parents. However, Cole stated that this trial is limited in that it only followed infants 6 months after the procedure, and did not perform prospective genetic screening.

Cole added that the trial raises technical questions about the procedure, including the frequency of spontaneous balloon deflation prior to removal, as well as the increased risk of pre-labor rupture of membranes and preterm birth.

“The current reports serve as a critical basis for future studies to improve outcomes in pregnancies complicated by fetal congenital diaphragmatic hernia and in infants,” Cole wrote.

Deprest and colleagues designed the Tracheal Occlusion to Accelerate Lung Growth (TOTAL) trial, to assess postnatal survival rates after FETO in infants with severe pulmonary hypoplasia from a diaphragmatic hernia on the left side. They conducted the open-label, randomized trial in 10 FETO centers and 26 neonatal care centers in several countries, including Belgium, Japan, the U.S., and others.

Women were included in the study if they were older than age 18, had a singleton pregnancy, were at a gestational age less than 30 weeks, had congenital diaphragmatic hernia on the left side and severe pulmonary hypoplasia. Mothers were excluded if they had conditions that would make fetal surgery risky or an elevated risk of preterm birth.

Starting in February 2011, researchers conducted preliminary assessments on more than 1,300 mothers carrying fetuses with congenital diaphragmatic hernia. The trial was stopped in March 2020 for efficacy at the third interim analysis, and 80 women were ultimately included. Of these, 40 were randomized to FETO surgery and 40 to expectant care. There were no differences in baseline characteristics between groups.

Deprest and colleagues noted that their results were limited by the long duration of the trial, as protocols for postnatal care of congenital diaphragmatic hernia may have changed. The group also acknowledged that this study only provides information on short-term outcomes, and that future studies are needed to assess the long-term effects of FETO. Finally, as the trial involved experienced fetal surgery units, the researchers said that results should not be generalized to centers that do not have experience in fetoscopy or FETO.

Deprest stated that future research will evaluate optimal timing of diagnosis, and medications that could improve the success of the procedure. “But there is hope now, for these patients,” he said.

The TOTAL trial was funded in part by grants from the European Commission, the Wellcome Trust, KU Leuven, Engineering and Physical Sciences Research Council of the United Kingdom, and the Unité de Recherche Clinique Paris Assistance Publique–Hôpitaux de Paris Center.

Deprest and colleagues reported relationships with the European Reference Network for Rare Inherited and Congenital Anomalies.