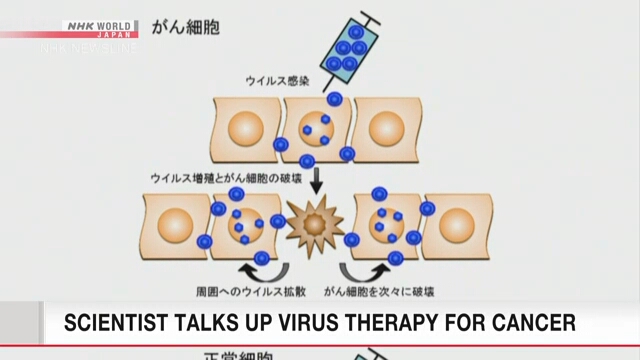 A Japanese researcher who developed a drug that uses a virus to attack brain tumor cells says it could be applied to many other types of cancer.

Professor Todo Tomoki at the University of Tokyo Institute of Medical Science spoke about his virus therapy in an online news conference on Thursday.

The drug uses a herpes virus that is genetically engineered to replicate only in cancer cells and destroy them.

Todo says the one-year survival rate of patients with recurring seriously malignant brain tumors after receiving standard therapy such as surgery is reportedly around 15 percent.

But he says the rate for patients given the virus drug in a clinical trial was 92.3 percent.

The drug would be the first of its kind to be approved in Japan. The professor says he worked with the drug’s maker and the government to open the way.

Todo says he wants to hold clinical trials for patients with various types of cancer to accumulate data.