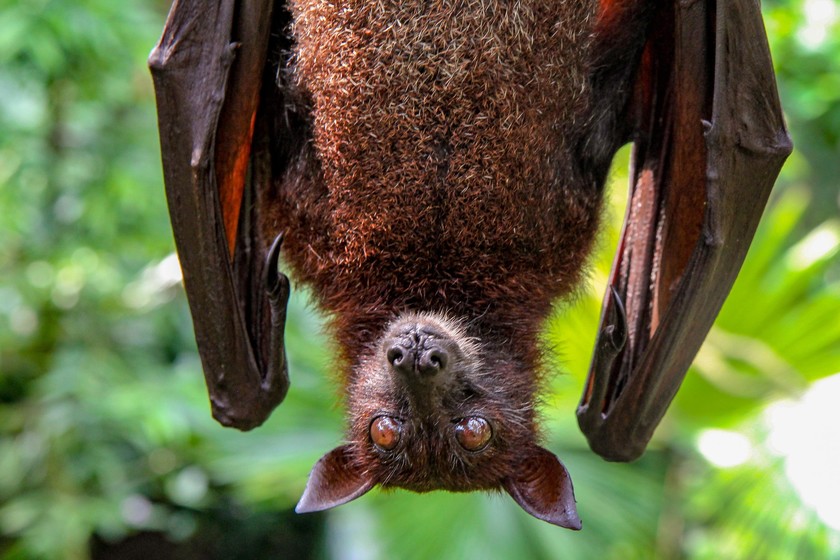 Although bats can contract SARS-CoV-2, they do not get sick. A new review attempts to understand why.
The authors explain that bats can quickly ramp their immune system up and down, maintaining immune balance when facing the severe stress of SARS-CoV-2 infections.
Their comparison between bats and humans reveals inflection points in human SARS-CoV-2 infections that could enhance success of clinical trials for therapeutics.
In a complete review of COVID-19 immunological research to date, the authors grade the evidence and level of recommendation for multiple immune targets as candidates for treatment of COVID-19.
Scientists from Australia and China recently released a comprehensive review of SARS-CoV-2’s immunological interaction with its host — bats. The review appears in the journal Science Immunology.

Although bats can contract SARS-CoV-2, they do not get sick. Understanding why that is might guide scientists as they develop new therapies for COVID-19.

Human immunologists and microbiologists collaborated with an expert in bat immunology Dr. Aaron Irving. First author, Dr. Michael Christie, and his colleagues joined forces with Dr. Irving to elucidate the similarities and differences in how bats and humans combat viruses.

Assembling granular detail of SARS-CoV-2’s interaction with these two mammalian immune systems, the scientists conclude there are well-defined stages and optimum times for targeted medical therapy in the human COVID-19 disease cycle.

Stay informed with live updates on the current COVID-19 outbreak and visit our coronavirus hub for more advice on prevention and treatment.

Dr. Nold-Petry replied: “I felt we had to get the aspect of learning what nature has to offer […] Because from so many things, in engineering and in new technologies, humans have looked at nature and copied it. We thought, Well, why not do that in immunology as well?”

Prof. Nold said: “When we first had this idea, there was actually no large review out there on immunology of COVID-19 […] It’s taken us this long to get [all the information] together and do it right!”

“We wanted to put something together where, when you come from basic science, or ‘discovery’ science […] the fundamental science at the protein level, and then take the next two steps, not only what causes disease […] but the next step, how do you actually make sense of that […] and use it to choose the right therapy at the right time? So, that was exactly the idea behind this review!”

The three stages of COVID-19
As the first step toward understanding the immunobiology of COVID-19, the researchers carefully delineated the clinical course of SARS-CoV-2 in humans:

Stage 1, which lasts 1–14 days: SARS-CoV-2 sets up “residence” in the human host. Many people remain asymptomatic, and of those who are symptomatic, around 80% have mild to moderate symptoms, 15% progress to severe COVID-19, and 5% become critically ill.
Stage 2, which begins 4–10 days after symptom onset: This is when virus growth continues, and moderate disease develops, most typically as viral pneumonitis. However, other organs can become affected, including the brain, resulting in headaches and vomiting.
Stage 3, which typically occurs 6–15 days from initial symptoms: This stage can include severe respiratory illness, multi-organ dysfunction, immune cell exhaustion, and hyperinflammation. For some, this results in the so-called cytokine storm.
The scientists note that the final stage is the inflection point in the disease, when damage caused by the individual’s immune system exceeds that caused by the virus.

The researchers explain that successful, built-in individual responses — or innate immunity — are a quick and effective protection. The best examples of this excellent innate immunity are in adults with mild or no symptoms, young people, and bats.

Prof. Nold described what he thinks is most impressive about the pathoimmunology of bats:

“They have a sort of higher baseline of what could be called defensive mechanisms, such as type 1 interferon and type 3 interferon.” Type 1 and 3 interferons are immune proteins that play an important role in antiviral activity.

“And because of that higher baseline,” Prof. Nold continued, “they can really rapidly ramp up that response upon challenge with a dangerous signal, such as viral infection, specifically a coronavirus infection.”

“For that reason probably, at least among others, [bats] make really quick and easy work with the virus, not eliminating it but containing it so it doesn’t cause disease. Because it’s so quick, they can also shut down [their immune system] really quickly. That last part is really important, because that is not what happens in humans — this is the mechanism by which bats avoid disease!”

Dr. Nold-Petry added: “[The bats] don’t come into these later stages [of COVID-19] as we humans do. To put it simply, they dampen it and balance their response — it doesn’t go off the rails [like in humans with severe COVID-19].”

‘Make use of time, let not advantage slip’ — Macbeth
In a graph that appears in the paper, the researchers delineated shifts in immune molecules in the blood of people with a SARS-CoV-2 infection. They correlated these changes to the three stages of human SARS-CoV-2 infection — the “timing” of the disease.

For example, people with a SARS-CoV-2 infection may experience increases in infection-fighting cells called neutrophils and monocytes.

However, there are simultaneous decreases in essential markers of immune strength, such as natural killer cells and type 1 interferon. The scientists attribute the reductions in these critical helping cells and proteins to “immune exhaustion.”

Dr. Marcel Nold explained that “if we understand the stages of COVID-19 disease and use common blood markers to guide clinicians as to what stage patients are experiencing, we may be better able to choose the right therapy at the right time for patients living with a SARS-CoV-2 infection.”

“You would like to support the host immune defense and give immune modulatory therapies — for example, type 1 and type 3 interferons […] for some patients — to fight off the viral disease,” Dr. Nold-Petry elaborated.

“Then, at a later stage, when the immune response is out of balance and goes rampant and starts to [act like an autoimmune disease], and you have cytokine storm […] you need to start an anti-inflammatory therapy.”

Prof. Nold later added: “There are trials of administering type 1 and type 3 interferon to patients. Again, they have not all been [fantastic] in their results, because at the time when they were started […] knowledge about the disease just wasn’t around yet, so they were given too late, essentially, and if you do that, maybe you even aggravate inflammation.”

He further explained: “Cytokines, you want their activity to be really strong at the start, when the desired function is to eliminate the virus. Then, at some point, the virus actually wanes in contribution to the COVID-19 disease and, what becomes more important, is the host’s own immune response.”

“And at that point, of course, you don’t want more cytokines […] You want to shut it down […] And, of course, if you give cytokines here, you make things worse!”

Small molecules, big implications
Prof. Nold and Dr. Nold-Petry described three clear inflection points where bat immunology has informed us how SARS-CoV-2’s devastating effects on humans could be eased in various stages of the disease:

early in infection, augmenting patients’ type 1 and type 3 interferon levels and quickly employing antiviral medications
inhibiting the inflammasome — a large protein complex — which, when activated, signals cells to generate cytokines, which is a precursor to the cytokine storm
when the immune system oscillates between severe inflammation and immune exhaustion, supporting the patient with potent anti-inflammatories, such as steroids and blockers of Interleukin-6
“Those three stand out from the analysis compared with the bats. We are not, of course, saying these are the only ones. There are many other therapies that probably have a very good chance to succeed provided they are timed right. But again, I am coming back to the timing issue, because that is absolutely critical.”

“It’s a guide; we still have to learn so much. It’s a summary of what we know now, but there might be more small molecules out there that have been tested in other diseases that could antagonize an autoantibody that is produced at a later stage. I’m sure we can do another review in a year,” Dr. Nold-Petry summed up.

“We are summarizing what is available now but pointing to opportunities that are out there: new cytokines and anti-inflammatories.”