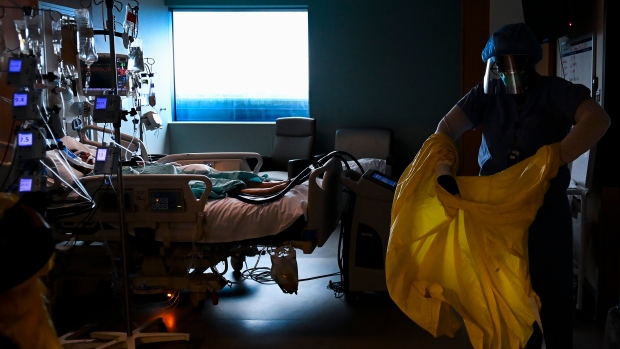 A new study using Canadian data suggests the Delta variant of the COVID-19 virus causes more serious disease and is associated with an increased risk of death compared to previous strains – dangers that are drastically reduced with vaccination.

The study, conducted by researchers at the University of Toronto and published Tuesday in the Canadian Medical Association Journal, analyzed more than 212,000 cases of COVID-19 reported in Ontario between Feb. 7 and June 27, 2021.

Some of the findings echo results from previous research papers published across the globe, but co-author David Fisman believes the study is the first large-scale analysis to include Canadian data.

The U of T epidemiology professor said that could be an important factor for some to more strongly consider the risk that Delta carries and get vaccinated.

“(The finding) jives with what the intensivists are telling us, which is that people come into hospital much sicker now than they did a year ago, but to see it in the numbers was initially pretty startling,” Fisman said.

“I hope by seeing that this really is a more dangerous virus than it was a year ago, maybe that will motivate some folks who are holding out in terms of vaccination.”

The study found people infected with variants of concern were significantly younger and less likely to have comorbidities than those with non-variant infections, while the increased risk of adverse outcomes persisted even after researchers adjusted for age, sex, comorbidities and other factors.

But researchers also looked at vaccine effectiveness, which blunted the severity of the variants by reducing risk of severe disease and death in partially and fully vaccinated people.

Fisman said one of the main reasons Delta didn’t devastate its way through Canada the same way it did in India was because the variant emerged here just as vaccination was ramping up.

Still, Fisman said Delta presents huge risk, especially for the unvaccinated who now make up the vast majority of COVID-19 cases, hospitalizations and deaths in Canada and elsewhere. Just over 80 per cent of those eligible were fully vaccinated as of Sept. 25, according to Health Canada.

Fisman said Thanksgiving gatherings can be risky if they involve mingling of vaccinated and unvaccinated adults, but danger can be mitigated by eating dinner outdoors if weather permits, keeping windows open or using air filtration systems as “your next line of defence.”

“Non-vaccinated adults are potentially creating risk for those around them,” he said. “We’re sort of expecting to see a bit of a bump in case numbers after Thanksgiving, so it’ll be interesting to see whether or not that pans out.”

Fisman and his team found the Delta variant was present in Ontario by April 2021 and became the dominant strain by July.

Fisman said he wasn’t surprised by how quickly Delta overtook other variants, which have “mostly disappeared” in the province.

“It’s just basically natural selection sped up,” he said. “We know that Alpha, Beta, Gamma, those were about one-and-a-half times as infectious as the Wuhan variant COVID, and then Delta approximately doubled that yet again.

“It’s a much more infectious strain and you see it sort of displacing those earlier variants.”

This report by The Canadian Press was first published Oct. 5, 2021.